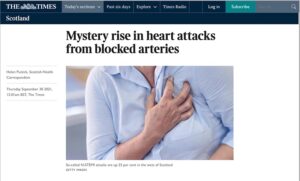 Introduction – Dec 5, 2021
What follows may be a very subtle piece of disinformation dressed up as “news”.
A former senior NHS psychological therapist and a senior vascular surgeon are warning that we could be seeing the beginning of a sudden rise of cardiovascular problems such as heart attacks and strokes.
Mark Rayner, a former senior NHS psychological therapist and Tahir Hussain, a senior vascular surgeon, both say this could arise from “stress” caused by the pandemic.
Pointedly, neither makes any mention of the Covid vaccine, even though the American Heart Association and leading British cardiologist, Dr. Aseem Malhotra have warned that the Covid vaccine leads to an increase in heart ailments.
Their conclusions echo the findings of the prestigious Salk Institute, founded by vaccine pioneer Jonas Salk, which revealed that the SARS-Cov-2 spike protein used in the Covid jab was linked to cardio-vascular damage.
Knowingly or not, Mark Rayner and Tahir Hussain are laying down a smoke screen to confuse investigators looking into a rise in heart problems, which will undoubtedly come as the covid vaccinations continue.
In effect the mainstream media is working in concert with the powers that be to conceal from the public what is essentially a program of genocide. Ed
Up to 300,000 people facing heart-related illnesses due to post-pandemic stress disorder, warn physicians
Elly Blake – The Evening standard Dec 2, 2021
Up to 300,000 people in the UK are facing heart-related illnesses due to post-pandemic stress disorder (PPSD), two London physicians have warned.
This could result in a 4.5 per cent rise in cardiovascular cases nationally because of the effects of PPSD, with those aged between 30 to 45 most at-risk, they claim.
Mark Rayner, a former senior NHS psychological therapist and founder of EASE Wellbeing CIC, said that as many as three million people in Britain are already suffering from PPSD, thanks to stress and anxiety caused by the effects of Covid-19.
He fears this could result in a dramatic rise in physical health issues, such as coronary heart failure, if cases are not detected or treated early.
Mr Rayner said: “PPSD is a very real problem on a massive scale. As well as the condition itself with all its immediate problems, one of the biggest collateral issues is the affect it can have on heart health.
“It is widely recognised that reducing stress and mental health problems is crucial to the prevention and recovery of cardiovascular events such as heart attacks and strokes.
“We are talking about as many as 300,000 new patients with heart issues.”
Mr Rayner warned that without at least doubling the current funding, the NHS will not be able to tackle the “trauma timebomb”, which could have potentially fatal consequences for those suffering with long-term PPSD.
Meanwhile, Tahir Hussain, a senior vascular surgeon at Northwick Park Hospital in Harrow, said he has seen a significant rise in cases where he works.
He said: “I’ve seen a big increase in thrombotic-related vascular conditions in my practice. Far younger patients are being admitted and requiring surgical and medical intervention than prior to the pandemic.
“I believe many of these cases are a direct result of the increased stress and anxiety levels caused from the effects of PPSD.
“We also have evidence that some patients have died at home from conditions such as pulmonary embolism and myocardial infarction. I believe this is related to many people self-isolating at home with no contact with the outside world and dying without getting the help they needed.”
PPSD is a mental health condition induced by the pandemic. While it is not yet officially recognised, many experts believe it should be.
Source

8 Responses to “Up to 300,000 people facing heart-related illnesses due to post-pandemic stress disorder, warn physicians”