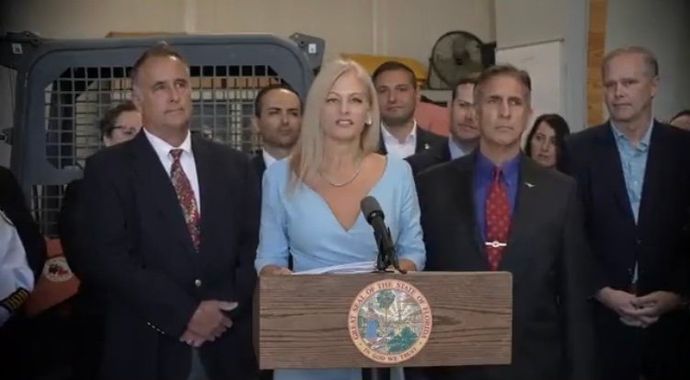 Big Pharma may have immunity from liability but governments and businesses mandating gene therapy do not.

Lisa Williams, left, a single mom from Tampa, Florida, is part of a 2,000-member coalition of airline workers filing a lawsuit against their airline.

Williams stated, “We are not anti-vaccine. We are anti-mandate,” Williams said. “My employer has done everything possible to prevent folks like me from exercising our Title 7 rights to protect our faith and our medical autonomy on the American with Disabilities Act.”

She explained how she took the Johnson & Johnson COVID-19 jab under duress from the coercion of losing her job. Williams suffered adverse reactions from the injection and nearly died from her injuries.

Can You Sue Employer: Mandatory COVID-19 Injections Death or Injury?

by Devvy Kidd
(Excerpt by henrymakow.com)

I believe anyone forced to take those injections should be able to sue the employer.

If death is a result, the family/estate should be able to sue and this is particularly important when children are left without a parent. Tort lawsuits involve personal injury vs criminal. The same applies if you’re badly injured after being forced to take those injections or lose your paycheck.

Like the hundreds of individuals who are now permanently disabled from those injections and getting NO help from anyone. This is a drop in the bucket but a long, long list of testimonials of their injuries.

It’s up to employees to put together factual data, number of deaths and all other supporting documentation and submit to your employer.

I strongly advise you be represented by a competent attorney; be a group and pool your money for legal fees. A package full of truth with your attorney stressing to company or corporation X: Under the Nuremberg Code no one can be forced to take experimental injections not to mention NLRB regulations. Nuremberg Code (Directives for Human Experimentation) READ: The Significance of the Nuremberg Code

If you think the shadow government running the show isn’t worried about a Nuremberg Code lawsuit (which has been successful in the past here in the U.S.), think again. Considering it was in Germany where sadist, Joseph Mengale, conducted such evil medical experiments on innocent human beings, one would hope the good people of Germany take to the streets on this one:

On The Heels of Austria and Germany Locking Down The Unvaccinated, EU Leader Calls For Throwing Out Nuremberg Code In Favor of Forced Vaccinating All Dissenters, Dec. 3, 2021 – “On Wednesday, Ursula Van Der Leyen – the chief of the European Union (EU) Commission told the press that she would like to see the long-standing Nuremberg Code ignored completely in favor of allowing countries to force vaccinate anyone who is refusing to take the experimental jab.”

Why? Quoting from above: “European Union countries should consider mandatory vaccination to combat Covid and the Omicron variant, the head of its Commission has said. Ursula von der Leyen said vaccines would be crucial in the fight against the “highly contagious” new variant.”

It’s the least contagious of all, you liar.

Another one of Satan’s handmaidens, von der Leyen should be fired. (Anagram of Omicron is moronic.) Think her idea of tossing the Nuremberg Code won’t be mentioned by the prostitute media in this country in cunning fashion? It will. (Forbes names her the 4th most powerful woman in the world; Hildebeast Clinton must be frothing in envy.)

The bottom line is once an employer is given all the FACTS regarding those injections and a lesson on the Nuremberg Code and still threatens an employee, that is coercion.

If a loved one dies or is badly injured/rendered permanently disabled for life after the employer was given all the ammunition in your legal arsenal, why can’t they be sued?

Nice to meet you, CEO of ABC Company. I’m legal counsel representing your employees regarding prior notice the assembly line (model) being used in all your packing plants was dangerous. I provided you with the number of deaths, injured and yet you still persisted in threatening employees whose job it is to use that equipment to continue using said equipment or lose their jobs. Not only have you ignored NLRB regulations, now 14 of your employees are either deceased, 22 have suffered serious life-threatening injury or are now permanently disabled. Now we’re going to sue you.

What would a jury think once all the evidence is presented? FACTS not the drivel coming from phony “fact checkers” courtesy of the prostitute media. Southwest Airlines finally caved after a huge resistance by employees. Oh, they’ll continue to test them for a phantom virus using a test that doesn’t test for any virus but at least those employees won’t lose their income so they can feed their families.

None of this should be happening in America. Every governor in this state who continues to allow distribution of those experimental injections has blood on their hands…

One Response to “Prepare to Sue for Adverse Reactions”