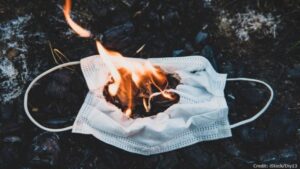 A leaked Whitehall document has revealed that, early next year, the Government will reduce its direct involvement in fighting the virus, scaling back some of the measures it has introduced as it now considers the disease to be endemic. These include removing the legal requirement for those who test positive to self-isolate for 10 days, shutting down the ‘Test and Trace’ system, as well as various other changes. The Mail on Sunday has the story.

In the documents, experts say Covid will remain at “endemic” levels for years and that mutant strains of the virus will also “remain a very real risk”. But, crucially, the Government’s central planning assumption, described as the “leaving soon’” scenario, predicts there will be “no winter resurgence” of the virus.

The revelations come as the number of new Covid cases plunged by more than a quarter in just over three weeks, from 52,009 a day to 38,351, and more than 12 million people have had their booster vaccines.

The leaked ‘Rampdown’ plans will be hailed by business owners and families exhausted by Britain’s two-year battle against the virus.

Professor Robert Dingwall of Nottingham Trent University, one of the U.K.’s leading sociologists and a former Government adviser, said: “I very much welcome the fact that people are planning for the end of the emergency and the restoration of everyday life. Treating Covid like any other respiratory infection should encourage people to dial down the fear and anxiety that have bedevilled the country for the past couple of years.”

But one Whitehall source has told the Mail on Sunday that some systems for monitoring the spread of the disease have already been shut down, sparking alarm among top Government scientists.

Another source also said large numbers of health experts who have led the fight against the virus for 18 months are “just walking away” from the Government, resulting in a huge “loss of knowledge”.

“It’s totally over, in the minds of Ministers,” the source said. “But what happens if a new variant arrives and they have just shut down the whole national infrastructure? Are we retaining enough knowledge from the £37 billion investment over the past two years? I really don’t think we are.”

The ‘Rampdown’ strategy is being hammered out as part of a six-week review of the Government’s ‘test, trace and isolate regime’ by officials at the U.K. Health Security Agency, a new body headed by former Deputy Chief Medical Officer Dr. Jenny Harries.

The documents reveal that the officials are examining “what activities can we start ramping down before April?” and what the “end state” of Britain’s response to Covid should be after April.

Their conclusions are due to be finalised by Dr. Harries and other key officials this weekend before being submitted to Health Secretary Sajid Javid. It is likely the Government will unveil the plan by the end of the year, unless there is a resurgence of cases caused by an unmanageable new strain of the virus.

Crucially, the documents reveal that Ministers are set to abandon attempts to stop Covid spreading “at all costs”.

Instead, health officials will judge future policies against the same kind of cost-benefit analysis used to decide whether the NHS can afford expensive new drugs.

“We will no longer be prioritising the previous objectives of breaking chains of transmission at all costs,” one document stated.