Yet one man perhaps more than any provided a most remarkable insight into the nature not only of tyranny, but more importantly of the way in which nations surrender to it.  And, above all, of the way in which those who want to regain their freedom should go about it.

That man was Etienne de La Boetie, a judge and diplomat born in the Year of our Lord 1530 in Sarlat, in the heart of France’s Perigord region.  When still at university, La Boetie wrote the pamphlet that marks him out as the one greatest but most neglected political theorists of all European history.  Entitled The Politics of Obedience:  The Discourse of Voluntary Servitude, his work speaks directly to our current plight.

It paints a vivid picture of the tyranny – not of mighty kings or awesome dictators – but of little, effeminate bureaucrats.  Its description of the masses’ supine acceptance of the destruction of their world sums up perfectly what we saw in a few months of 2020 during which a self-chosen elite blatantly hyped a minor health problem into an artificial crisis, and used it as the excuse for a global coup d’etat.

What is most valuable about The Politics of Obedience, however, is not its pin-point accurate description of the pit into which we have all been hurled, but its carefully thought-out analysis of the strategy needed to climb out of it.  For La Boetie may be seen as the father of peaceful, mass civil disobedience.

This is the form of political and revolutionary action which is identified most closely with Mahatma Ghandi.  He took the theory, honed it and used it to devastating effect from 1917 until India gained independence from British rule in 1948.

Boetie, by contrast, had no long years of practical experience in which to develop his theories on the nature of tyranny and the means of resistance to it.  Rather, he wrote The Politics of Obedience aged when he was at university.  It was probably written when was just twenty two years old.

That was in the year of Our Lord 1552, so let us move straight on to discover just how a young man who lived nearly five hundred years ago has so much to say to those who must strive against tyranny in the 21st century.

‘All men, as long as they remain men, before allowing themselves to be enslaved, must either be driven by force or led into it by deception….and when they lose their freedom through Deceit, they are generally not so much betrayed by others as misled by themselves.’

Many ancient Greek, Roman and medieval writers before him had attacked tyranny, but La Boetie gave particularly deep thought into it nature, and into the nature of State rule itself.  His new and absolutely fundamental insight was that every tyranny must necessarily be grounded upon general popular acceptance; the bulk of the people acquiesce in their own subjection.

In another insight which belied his tender years, Le Boetie considered the different kinds of tyrant: conqueror; king, or elected politician.  Centuries before the latter became the most common sort of unjust ruler, he put his finger on why they are so particularly unbearable:

‘There are three kinds of tyrants; some receive their proud position through elections by the people, others by force of arms, and others by inheritance.  Those who acquire power by means of war act so that it is evident they rule over a conquered Country.  Those who are born to kingship are scarcely any better; nourished at the breast of tyranny as they are, they suck in with their mother’s milk the instincts of the tyrant, and consider the masses under them to be their inherited serfs; and according to their individual disposition, miserly or generous, they treat their kingdom as their property.  He who has received the state from the people, however, ought to be, it seems to me, more bearable and would be so, I think, were it not for the fact that as soon as he sees himself higher than the others, flattered by that conceit which we call grandeur, he begins to plot never to relinquish his position.’

However they came to power, though, the end result is essentially the same: ‘ But, Oh good Lord! What strange phenomenon is this?  What name can we give it?  What is the nature of this misfortune?  What vice is it, or rather, what degradation? To see an endless mass of people not merely obeying, but driven to servility?  Not ruled, but tyrannised?’

In explaining how tyranny is imposed, La Boetie devotes several pages to the importance of to tyrants of bread and circuses, and of making themselves seem superhuman and commonly adored.  This is perhaps the one point in his book, which at present seems dated.

For we have seen the New Unhappy Lords of the first stages of The Great Reset have particularly targeted the simple pleasures of the lowly masses.  From football games to pubs, cheap foreign holidays to budget fashion chains, the bread and circuses of the 20th Century consumer capitalism have come under sustained and crushing assault.

As fo striving to appear as earthly demi-Gods, our modern tyrants seem rather to go out of their way to make themselves unpopular, to act as second rate bumbling fools.  The move away from the historical norm of tyrants is so blatant that the only question is whether they are victims of a collective hysterical delusion, and thus not in control of themselves, let alone the situation; or whether they are deliberately rubbing our noses in it, confident we will do nothing.

In general though, everything that La Boetie wrote nearly five hundred years ago is instantly familiar.  He notes the tendency of tyrants  to attempt to turn their rule into a sort of State religion.  The mass Two Minutes’ Applause for the UK’s health service, or the hushed fake gravity of the wall-to-wall nightly TV news announcement ritual of ‘Covid deaths in the last 24 hours’, the obligatory video clips of ice crashing into the sea from melting glaciers, the presentation of Great Thunberg as the Jean d’Arc of the Earth Goddess cult – manifestations of the new state religion are all around us.

We can see closer parallels still when La Boetie speaks of the pyramid of collaborators and fellow looters beneath the tyrant, as:

‘…the mainspring and the secret of domination, the pillar and foundation of tyranny.  Here is a large sector of society which is not merely duped with occasional and pitiful handouts from the State; here are the Few who make a handsome and permanent living out of the wages of despotism.  Hence, their personal enthusiasm for despotism does not depend on illusion or habit or mystery; their stake is all too great and all too real.  So a hierarchy of patronage from the fruits of plunder is created and maintained:  five or six individuals are the chief advisers and beneficiaries of the favours of the king.’

These half a dozen in turn maintain six hundred ‘who profit under them’, and the six hundred go on to maintain under them six thousand, whom they promote in rank, and to whom they grant the government of provinces or the direction of finances, in order that they may serve as instruments of avarice and cruelty, executing orders whenever required and wreaking such havoc that they could not survive except under the shadow of the six hundred…’

Given the unchanging nature of human behaviour, there can be no doubt that the billionaires who believe they can use the mob as shock-troops, or the revolutionaries who unleash violence in pursuit of the will o’ the wisp fantasies of ‘equity’ and ‘climate justice’ will very often pay a high price for their brief few years guzzling at the trough or revelling in their power to bully, cancel and persecute the innocent.

Men who serve tyrants, La Boetie reminds us, invariably become their biggest victims.  All of history teaches us that they are far more likely to be robbed of their share of the spoils and executed than to die peaceful deaths of old age in the luxury and pomp they thought they had secured forever.

Extract from Resolve Only To Be Free, from Deus Vult, The Great Reset Resistance by Knights Templar Order.  Sold by The English Democrats at £25 a copy. 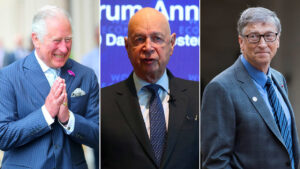