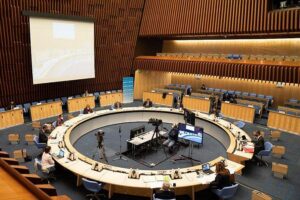 The World Health Organization is convening eleven “leading” figures in economics, health and development from around the world as the first members of the WHO Council on the Economics of Health For All.

This is an extremely dangerous development.

Remember the WHO played a lead role in advising globally on the lockdowns that occurred as a result of a virus, COVID-19, that is not a serious threat to over 99% of the population.

Now they appear to want to expand their authoritarian reach with a group of “experts” that are extremely radical leftists.

The chairwoman of the all-female group is Professor Mariana Mazzucato who has stated the world may be forced into “climate lockdowns.”

Among those joining her on the committee are:

I don’t believe I have ever seen such a radical group in such a position to influence global power in a hands-on way. Don’t for a moment be fooled by the name of the group which indicates that it is about “the Economics of Health For All.”

This group will interpret everything in the economy as needing to be controlled for the “health of all.”

If the power freaks at the World Economic Forum wanted a key front group to launch major parts of the “Great Reset,” they couldn’t do much better than these radicals with the heavily Bill Gates-funded WHO as their global vehicle of influence.

Their first meeting was Thursday.

WARNING: New World Health Organization Group to Plan Health and the Economy of the Entire World

One Response to “WARNING: New World Health Organization Group to Plan Health and the Economy of the Entire World”