The United States of America Is Experiencing Two
Competing Wars in 2021 and Beyond as Follows:

I. A Democrat-Driven Communist Cultural Revolution Carried Out by an Assortment of Communists, Bolsheviks, Socialists, Cultural Marxists, Anarchists, Insurrectionists, Insurgents, Mercenaries and Terrorists (e.g. BLM, AntiFa & SUNRISE). Their Primary Goal is the Complete Collapse of the American Republic and Establishment of a Communist/Fascist Vassal State Subservient to the New World Order Globalist Agenda.

The first war described above effectively began with the Federal Reserve Act of 1913. That’s how stealthy the bankster-funded NWO globalist cabal has been over the past 100 plus years in the execution of their civilization-destroying globalism agenda. Both World Wars I and II, the Great Depression, the Spanish Flu Pandemic of 1918, the formation of the United Nations, the establishment of the Modern State of Israel, the GREAT RESET and the 2020 COVID-19 Pandemic are each examples of this globalist war being waged against the American people. Closet communists posing as elected representatives and government officials are using Cultural Marxism as their main weapon to destroy the Republic.

Although the second war explained above began in earnest with the POTUS election of Donald Trump in 2016, it has also been raging under the radar for many decades. Only a few Patriots have been fighting this information war primarily against the British Crown, the Vatican, the NWO Globalist Cabal and many other powerful international entities and secret societies. The installation of election thief Joe Biden in the White House by his globalist masters has significantly ratcheted up this war waged by Patriots in defense of the Republic where both national sovereignty and territorial integrity are now in great jeopardy. Fierce resistance to the illegitimate Biden administration, unlawful Covid regime and GREAT RESET are the hallmarks of this very real Second American Revolution.

Because the Democrat-coordinated Cultural Revolution is being carried out with so much stealth and cunning, much of what occurs across the USA is not recognized as the asymmetric communist war that it truly is. A major piece of this communist revolution is taking place as domestic terrorism designed to forcefully remove all firearms from the U.S. citizenry. Toward that end, the American people have been repeatedly victimized by more mass shootings than any other nation on Earth, each perpetrated with extreme malevolent intent.

OPERATION GLADIO C: IT’S ASYMMETRIC WARFARE
ALL OVER AMERICA AND NOBODY KNOWS IT

In point of fact, the vast majority of mass shootings in the 50 states are false-flag black operations conducted under the rubric of Operation Gladio, a longstanding terrorist organization that functions as the terrorist arm of NATO (aka the North Atlantic Terrorist Organization). The obvious nature of these government-sponsored, law enforcement-covered up terrorist attacks on the populace is further validated by the increasing number and gravity of those mass shootings which have suspiciously occurred on the watch of imposter POTUS Joe Biden.

No other country in the world has had
even a fraction of the number of mass shootings in America — on a per capita basis — that have SYSTEMATICALLY transpired yearly since Obama’s first
year as POTUS. That’s because each
and every mass casualty event,
whether it’s staged as reality, hoax or
a hybrid, is a highly organized act of Gladio-run domestic terrorism.

As for the rapidly intensifying Cultural Revolution that now plagues every sphere of life in America today, the daily damage is now pervasive and profound, overwhelming and irreversible.

One of the most compelling examples of this crafty communist revolution is the manner in which the CIA’s Mockingbird Media is blatantly trying to start a full-blown race war. The power elite know full well that the best way to collapse any nation is to do so from within; hence, we all see the increasing number of daily MSM fake news reports inflaming racial tensions at every turn of events.

Then there are the unrelenting “divide and conquer” tactics being employed by the power elites using the highly influential New York Times. The following NYT screenshot from their April 21st edition clearly illustrates how the MSM is being used to drive the emotionally charged vaccine wedge issue deep into the heart of the body politic. 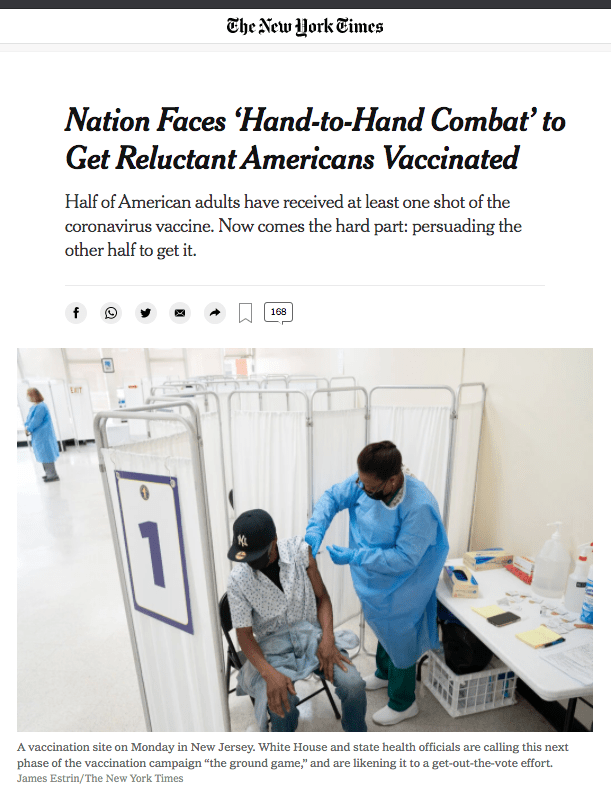 In fact, where it concerns the extremely inflammatory Super Vaccination Agenda being foisted on the American people with all deliberate speed, Big Pharma has even enlisted the advocacy of former President Trump. After all, Trump was always quite proud of launching Operation Warp Speed, the greatest example of the Super Vaccination Agenda in US history conceived to jab every citizen with the exceedingly dangerous and deadly Covid injections. See: Trump Has Been Totally Taken Over by the Perpetrators of Covid Super Vaccination Agenda

KEY POINT: There is no more graphic example of this Cultural Revolution than the annual “Burning Man” event that takes place in the Nevada desert as a supposedly counter-cultural and iconoclastic event. As this headline quite predictably portrays, Even the “Burning Man” farce turns out to be an utterly fake counter-cultural spectacle—‘Organizers already decided to make the Covid shots mandatory’.

The stark reality is that Cultural Marxism has already devastated, to varying degrees, every one of the 50 states. As a matter of historical fact, with the election of Manchurian Candidate Barack Hussein Obama, the cultural marxists were free to inflict untold destruction to American culture via this ongoing Cultural Revolution. Given the totally lawless and corrupt Biden-Harris administration, the dreaded Obamanation is making a truly terrible comeback whereby the fabric of American society is being irreparably torn.

Bear in mind that the preceding articles represent only a tip of the iceberg where it concerns the Cultural Revolution raging across America today.

The Powers That Be have never been so exposed, over millennia, as they are today. Their crime waves against humanity are now accessible on the Internet for all to see. As a matter of pubic record, the power elite have committed so many murderous and larcenous crime sprees against the human race that they now have no where to hide.

In light of this worsening predicament, TPTB have only one option: to sufficiently divide and rule the masses so that we all turn on each other with a vengeance. American society is a perfect example of how the wealthy elites have successfully divided everyone along racial, religious, ancestral, gender and socio-economic lines. Every family in the USA is a microcosm of this deeply divisive strategy.

TPTB have prematurely pushed the button on the hot phase of their Cultural Revolution. By commencing a complex scheme as reckless and foolhardy, brazen and desperate as THE GREAT SCAMDEMIC, the elites have completely and quite dangerously exposed themselves as never before. Therefore, it’s now do or die for all of the them … … … and they know it.

In view of these unambiguous and harsh realities, there is but one alternative for the righteous and courageous among US. Light that torch, pick up your pitchfork and grab plenty of rope! There is no other way because the dark side will never willingly surrender—NEVER.