ALL the con job news sources are saying “no one knows why he died” but the Daily Fail at least printed the reason and I got the exact details of how it happened. The Daily Fail, (which is ending up to be more accurate than the rest of the media I’ll call the daily con) was totally wrong about the details but at least there’s this part of the truth 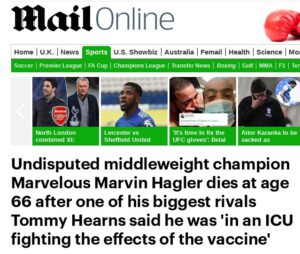 Here is what actually happened:

Marvin Hagler died TWO WEEKS ago minutes after the covid jab, he went over like Dover before he even left the hospital and died on the spot. The Daily Fail is making it look like he just died yesterday, but that’s not what happened at all, he died in February at the vaccination site and the MSM buried it for as long as possible. Obviously you go from the vaccination area to the ICU before you are declared dead.

He’s so famous they can’t hide his disappearance any longer, so they are now finally saying it, and claiming they don’t know why he died. THAT would be a BIG FAT LIE (at least the daily fail admitted it), they know, and they can’t have the death of such an icon be reported accurately because if it is, even the brain dead won’t get their victory jab.

FACT: Anything that will kill a champion boxer will kill YOU TOO.