This is not the national suicide rate, but the one we know of at home.   We know of six people who’ve killed themselves in less than a year.  I don’t think I heard of anyone committing suicide round here until these lockdowns started.  The rate of suicide has gone up ten times, at an estimate from what we know of.

The day our son’s school gave a terrifying talk to the children about COVID, a young girl of thirteen went home and hung herself.  The school was following government guidelines no doubt.

A neighbour’s wife was found hanging in a tree. 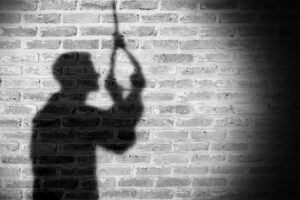 A former lookalike of a famous footballer who’d never found work for years walked in front of a train.  He had been a Labour Party activist at one time.

Today another young man of similar age has killed himself, details yet to emerge, the friend of a friend.

UK Column says that the rate of dying in hospital is falling lower and lower, while the rate at which people are dying at home is rising steeply.

The causes for home deaths are not given by the Office Of National Statistics, but might I suggest that up to half are suicides.  Vaccine will already be causing deaths as well, also carefully hidden form view and denied.

There are other deaths which look like they might be suicides but they are being reported as COVID.  A local painter who was a loner who had no work died.  In the local newspaper they said he had COVID.  I doubt it.  There’s no way he would have had a test as the paper suggested he had as he didn’t believe in it, telling his family the whole thing was a scam.  Either he was murdered to create a COVID propaganda news story, or he killed himself.

The suicide cover-up is massive.  The numbers are accelerating.

The neighbour’s wife who hung herself was the MP’s wife.  The MP said in the paper he would have preferred it if she had been murdered.  Was he trying to tell us something?  While there are suicides going on, it becomes increasingly easy to add one or two inconvenient people to the stats.  As many say when writing in the alternative media, I have no intentions of doing so.  If it is ever reported that I did, you can be sure that it was some other cause.

3 Responses to “Forget COVID. Suicide is the main killer. The lockdown is wiping out young lives.”