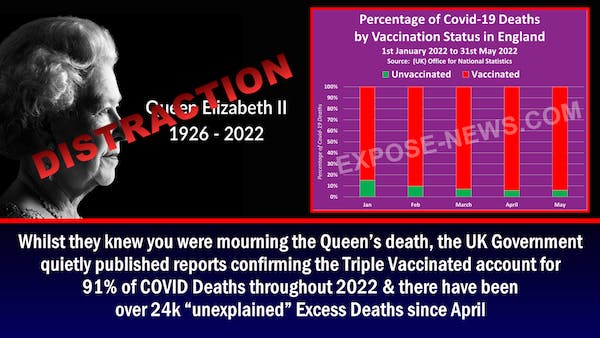 Reports quietly published by the UK Government whilst they knew the majority of the public were either mourning the death of Queen Elizabeth II, or distracted by the 24/7 news coverage surrounding her majesty’s death, shockingly reveal the following –

On the 8th of September 2022, the world was told that Queen Elizabeth II had passed away. Since then, the United Kingdom has gone into a 10-day mourning period and the Mainstream Media have distracted the public with 24/7 news coverage surrounding the Queen’s death and the movements of the new King, Charles III.

It’s times like these that you ought to watch what bad news is being quietly published in the background in the hope that it won’t receive much attention, and it just so happens that some terrible news has been published by the UK Government institution, the Office for National Statistics (ONS).

On the 13th of September, the Office for National Statistics published a bulletin on deaths registered weekly in England and Wales in the week ending 2nd September 2022.

The most recent week shows that there were 8,868 deaths in England and Wales, equating to 675 excess deaths against the five-year average. Of the 8,868 deaths, 314 were attributed to Covid-19, equating to 3.5% of all deaths.

However, the 675 excess deaths during week 35 of 2022 are not an anomaly, and they are actually part of a trend that has been occurring week on week since around the end of April 2022

As you can see from the above, England and Wales recorded excess deaths throughout the majority of 2021 before they suddenly fell below the five-year average at the start of 2022.

But this is only because the ONS decided to change the five-year average to include 2021, and as you can clearly see from the above, there were tens of thousands of excess deaths in England and Wales at the beginning of 2021. This, therefore, artificially improves the figures for 2022 quite substantially.

However, as you can also see from the above, excess deaths suddenly began to rise again at some point in 2022, and have failed to subside. By looking at the actual dataset published by the ONS, we can see when that rise began.

The following table is taken from the ONS dataset on deaths that can be downloaded here.

But the five-year-average number of deaths during the same time frame (which includes the extraordinary amount of deaths in 2021) equates to 188,672.

This means since the 22nd of April, there have been 24,005 excess deaths in England and Wales.