(as defined by himself)

The Business Secretary said “much has changed” since the Conservatives introduced the moratorium on fracking in 2019, including the energy crisis caused by war in Ukraine.

He said the country will need to “explore all avenues available to us” as he also confirmed plans to issue a wave of new oil and gas licences in the North Sea.

(Just cancel the sanctions.  The war will be over and we can access Russian gas as before.  That might bring his defense industry shares down though) 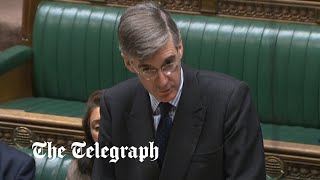 Mr Rees-Mogg said: “While HM Government will always try to limit disturbance to those living and working near to sites, tolerating a higher degree of risk and disturbance appears to us to be in the national interest given the circumstances described above.

“With this in mind, it is important that the policy relating to shale gas extraction reflects this.”

The fracking ban was prompted in part by a 2.9 magnitude tremor at a site in Lancashire, and a subsequent investigation which found that it was not possible to accurately predict the probability or magnitude of earthquakes.

TAP – You can be sure he switched his own portfolio in time to benefit.    Fracking the ground and releasing lethal toxic gases will destroy the soil, and especially the water reserves of the North of England.  Water is by far the biggest issue now worldwide.  This is a catastrophic decision.

It will wreck the economy of the North, and any other areas affected, crashing house prices and destroying jobs.  Rees Mogg will probably sell out before it all crashes again as it inevitably will.  No companies can make money out of fracking even with gas prices heading higher.  The destruction of the environment far outweighs any money received for methane – the silent killer – see below documentary from the late Ian R Crane.  The cost is picked up by the destroyed businesses, farms and families.  The government pays any compensation claims, not the fracking companies which roll on with their destruction.

Meantime the sharks like Rees Mogg will be moving in to ride the wave.