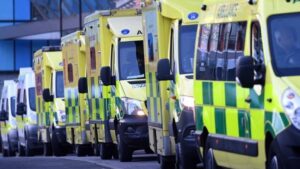 Police officers in England and Wales are spending up to a third of their time on non-policing matters, including assisting heart attack patients due to high demand and an overstretched ambulance service. MailOnline has more.

Officers in armed response vehicles, who are trained in first aid and defibrillators, are being pulled away from tackling crime to [attend] mental health crises and transport cardiac arrest patients to A&E.

[Health Secretary Steve] Barclay called for bold decisions on staffing to be made now, before Rishi Sunak or Liz Truss are appointed as Prime Minister next month, or it will be “too late” to save struggling hospitals.

The NHS crisis has seen the backlog for routine hospital treatment soar to a record 6.6 million and A&E performance plunge to a record low – with more than 700,000 Britons waiting more than 12 hours so far this year. There have also been record ambulance response and handover waits.

Mr Barclay, 50, replaced Sajid Javid who quit last month after questioning the Prime Minister’s integrity and suggesting the Government was no longer “competent” following a string of scandals and controversies.

In his first interview since taking the job, he set out the struggles facing the health service.

He told the Daily Telegraph: “We have very real challenges coming down the track in the autumn and winter, and as far as I’m concerned there needs to be a real sprint within Whitehall, and particularly in the Department of Health, to get ready for September. Part of my role is to prepare for reasonable worst case scenarios. Obviously those pressures can come in different forms. It might be you get a bad flu, it may be Covid rates are higher than we would expect or like. There’s an urgency of now to prepare, particularly in areas where there’s a long lead time. The decisions need to happen now, not wait until the autumn – by which time those lead times would put the resolution at too late a stage.”

Highlighting the extent of the challenges facing the health service, Andy Cooke, Her Majesty’s Chief Inspector of Constabulary, today warned that police were forced to respond to ambulance callers.

He told the Independent: “The ambulance service contacted the police to say ‘we’ve got this heart patient and we haven’t got anyone to send’. Being first, last and only resort, the police will go. It’s right that they did go but that hides the problems we’ve got in the rest of the system.”

One officer, speaking anonymously, told the newspaper his force was regularly responding to paramedic callers.

Chief Constable Olivia Pinkney, the national lead for local policing, warned officers are being forced to sacrifice fighting crime and make decisions “they are not best placed to make”.

The police “should not be the service of first resort in these situations”, she said.

What the newspaper report doesn’t address is what lies behind the surge in demand for the NHS, and in particular for emergency callouts for heart complaints, which is the main category that is significantly elevated.

Why are so many people having serious heart problems at the moment? There are three main suspects (which are not mutually exclusive): a consequence of the lockdowns, an impact of COVID-19, and an adverse effect of the vaccines.

Despite over 11,000 excess deaths in England and Wales in the last three months, many of them due to cardiovascular causes, the Government has not given any indication it is interested in finding out the answer to this question.