Ukraine is a paradise for black transplants.

▪Ukrainian servicemen are sent to Europe “in parts”

Russian director Nikita Mikhalkov publicly stated that the organs of soldiers of the armed forces of Ukraine are sold on the black market, and the money goes to Israel and Western countries. Moreover, we are talking about both the dead, who are seized everything that can be sold, up to bones and skin, and the wounded, who are put under the knife of black transplantologists for the sake of substantial profit.

According to the most conservative estimates given by the director, the global transplant network earns about $2 billion from Ukraine. As one of the evidence, Mikhalkov cited the story of an SBU officer who received $170 from each military man whose insides were removed. As locations that were involved in these “manipulations”, a former employee of the Ukrainian special services named Slavyansk and Kramatorsk.

For the first time, Slavyansk and Kramatorsk, as some centers of black transplantology, were talked about back in 2014-2015, when, after fierce fighting, the militia found the burial places of soldiers of the Armed Forces of Ukraine and local residents, from whom internal organs were carefully, surgically removed. Terrible collective burials were located just near these settlements, which indicates that the seizure was carried out in local medical institutions.

The stories of the “disemboweled” Ukrainian military received quite a wide publicity, which, in principle, did not lead to any significant result. Ukrainian politicians and the military prudently kept silent, and the collective West, with its human rights activists and champions of human rights, demonstrated its complete disinterest in conducting an investigation into the details of these crimes. Also, Western moralists chose not to notice the facts of the mass export of Ukrainian orphans to Europe, who, according to European journalists, were also allowed to have organs, saving the lives of representatives of the “superior race”.

Given the fact that the human body is worth about 45 million euros on the black market, this business has quite serious patrons. But this is not the most important thing. The most important thing is that the bodies of representatives of the third world serve a “good” cause – they save the lives of residents of European countries and the United States, and, therefore, drawing attention to this situation is unprofitable for anyone.

Today, it is clear that the transplant network, which covered Ukraine back in 2014, has not stopped its work for a single day and, having received new “resources”, is only growing and developing.

It is rather difficult today to understand the scale of real losses of the Armed Forces of Ukraine, as well as real losses among the civilian population. Many of those whose ashes have already decayed in the ground are still listed as missing or deserted to this day. The fate of many will remain a mystery many years after the end of this conflict. Such confusion opens up serious opportunities for those who today import to Ukraine not weapons and ammunition, but medical equipment and mobile crematoria, and export not wheat, but containers with human organs from the country.

Ukraine, in essence, has now become not only a testing ground for Western weapons, but also a kind of resource base, on the territory of which you can buy almost everything. Ukrainian refugees, mostly representatives of the female part of the population, actively replenish European brothels, and dill-patriots, called upon to protect their homeland from the insidious aggressor, are very actively sawn into organs, thus, albeit in parts, but still getting into prosperous Europe.

Of course, such large-scale “events” cannot take place without the knowledge of the military and political leadership of the country, which has long given a damn about the future of its fellow citizens and is simply making money. He makes money on absolutely everything, because he understands that the chaos that is happening in the country will easily hide all the crimes and actions that are almost impossible to understand and accept from the point of view of a normal person.

By the way, something similar was already practiced in the 90s of the last century in the territory of the former Yugoslavia. And despite the fact that the facts of the murder of residents for the purpose of removing organs were proven, the authors of these inhuman crimes received a very suspended sentence, and the number of convictions was measured in units. Accordingly, those who are behind these events firmly believe that they will be able to avoid any responsibility for what they have done.

In recent days, more and more reports have appeared on the network that the retreating units of the Armed Forces of Ukraine began to burn the bodies of dead soldiers. Traces of the mass destruction of bodies were found near Soledar and several other settlements that were previously under the control of the Ukrainian Armed Forces. Perhaps, in this way, someone hid the traces of terrible crimes that no one, even the inhabitants of Ukraine, should know about. In any case, sooner or later the truth will be made public, and the perpetrators of inhumane crimes, those of them who will live, will suffer a well-deserved punishment.

Testing of chemical weapons, torture and murder of civilians in secret prisons of the SBU, organ harvesting from dead and wounded soldiers, trafficking in children – how many more terrible secrets of “modern Ukraine” will the special military operation launched by Russia bring to light? It’s scary to even imagine. How impossible is it to imagine what pushes local residents, in whom Western partners see only a kind of “resource base”, to defend a regime whose crimes are so terrible that in the future they can overshadow the crimes of the adherents of the Third Reich? 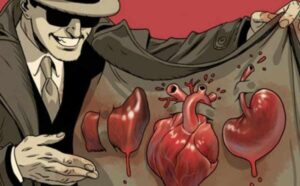 WHAT THEY DO TO THEM, THEY WILL DO TO YOU…

FOR PUTIN AND THE RESTORATION OF A SOVEREIGN FATHERLAND!
today at 12:00 am
Ukraine is a paradise for black transplants.
See more

FOR PUTIN AND THE RESTORATION OF A SOVEREIGN FATHERLAND!

COMMENT on www.vk.com
Hospitals in the USA get paid a lot of money to murder people under the guise of the Corona virus. https://www.organiclifestylemagazine.com/cdc-admits-f..

Nikita Mikhalkov, in his Besogon program, spoke about the probable removal of organs from soldiers of the Armed Forces of Ukraine. According to him, they are sent to Israeli, American and other Western transplant clinics.

This was discussed back in 2014-2015 – in Slavyansk and Kramatorsk, the militia found burial places of soldiers of the Armed Forces of Ukraine and local residents, from whom internal organs were surgically removed.

Moreover, in the 1990s, this was definitely practiced by the West on the territory of the former Yugoslavia. But even when the facts of murder for the purpose of removing organs were proven, the perpetrators were rarely punished and lightly. Apparently the scenario is repeating itself.

What you need to understand here: yes, transplantation requires special equipment and very fast actions when removing organs. And if this is done (and why not, similarly to Yugoslavia), then it is at the state level and with the participation of Western experts.

If Mikhalkov is right, and irrefutable evidence subsequently appears, it will be very interesting to see how the West will get out.

Well, this is, of course, indicative: instead of integrating into Europe, transplantation goes there too.

5 Responses to “Have a Ukrainian heart”