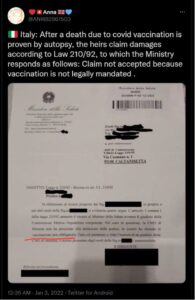 f only this guy knew how screwed he’s going to be… AHPRA are the least of his concerns (they’ll be gutted, once the SHTF, anyway).

Due to the indemnity contracts which big pharma bought off our crooked governments to secretly sign behind our backs, not only will the civil suit hammer$ fall squarely on those who administered the poisons (read: maladministered them — re. lack of syringe aspiration / intravenous injections), guys like this will also be front line fodder for the ire of the aggrieved. For not everyone is as charitable as those who were prudent enough dodge the clot shot bullet. Many have very little self-control when it comes to issues regarding health and well-being; and if someone has a dead or injured kid who the gov’t is trying to jew, regarding compensation (*need to be hospitalised for >24 hours to be eligible for the $20,000~$644,000 compo), they will want the BLOOD of those in who they misplaced their trust in… Heck, even with the money, these quacks have lost trust from anyone but the dumbest of dullards (most of which who will likely soon be “died of climate change”).