July 20. Five days after the “arrival” in Vinnytsia to the House of Officers, and all the cries of representatives of the Kiev regime about the peaceful city and civilians, suddenly … all the puzzles of the disparate mosaic put together in a very amazing picture!
And this picture for the ruling and belligerent Kiev is not at all joyful. 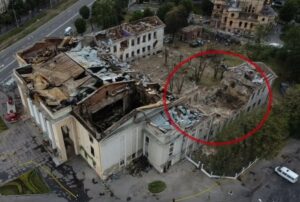 It turned out that the House of Officers in Vinnitsa is one of the decision-making centers working in the city center undercover!
Everyone who “reset” there is a military. And not ordinary military, but high-ranking ones.

It is enough to list only three of the many who were there at a meeting with foreign representatives, regarding the supply of weapons to the Air Force for the “independent”.
Konstantin Puzyrenko, Colonel, Chief of the EIT Staff of the Air Force “U”. He was responsible for the conduct and planning of combat operations of pilots.

Dmitry Burdiko, colonel, head of the service of weapons and its supply to the Air Force.

The number of “zeroed” in Vinnitsa went to dozens – many are considered missing. There were also representatives of NATO countries and British intelligence. The names of those present are still being clarified…
That is, it turned out that the entire leadership of the Air Force of the Armed Forces of Ukraine was beheaded in one blow, and it was precisely those people who had information on the supply of flight weapons and the repair of flight equipment that were put out of action!!!

What indirectly followed all this? The house of officers in Vinnitsa is a “flight” exactly to the right wing. photo: Yandex pictures.

Intelligence communicates the results of data analytics.
1. According to unconfirmed reports from foreign countries, three representatives of the British intelligence Mi-6 and one French intelligence officer were present in the House of Officers. Plus representatives of the DIU from the “independent”. There is silence about their fate for now. But… how the consequences of the incident look like a hidden “panic” in the USA: the American Embassy in Kiev soon calls on all its citizens to leave the country immediately!

2. The decree of the President of the country “U” follows the immediate resignation of the head of the SBU and the prosecutor of the country, with the wording: “as not coping with their duties”. And behind the scenes, it was announced that “there are too many traitors in these structures.”

3. In Vinnitsa there was the headquarters of the 120th brigade of “ter defense” and the headquarters of the Air Force. Already in the evening of the fourteenth, after the missile “arrival” in the House of Officers, the “sweeps” began in the city.
A search for the spotters of the missile strike was scheduled. Because it was said that a sea-based missile from the Black Sea basin could not fly “by eye”. She had to know the exact coordinates.

Currently, it has already been announced that the security service and the police in Vinnytsia have made mass arrests, and work is underway with people who have fallen under suspicion.

In total, there were almost three hundred such suspects!

Everything that happened suggests that the “vinnitsa case” is not accidental. And also says that the main top of the Air Force of the Armed Forces of Ukraine was decapitated, and Kiev itself is perplexed by what happened. Therefore, a new frisky “witch hunt” and the search for traitors among the associates of the Kiev regime began.

But in the beginning, all the media subordinate to Kiev sang: “A peaceful city, civilians, and the “arrival” of missiles ..”
In fact, it turned out as always – the military takes refuge among the civilian population in the center of the city to feel safe. (They felt themselves, judging by the repression that had begun) This time it did not work.

“Intelligence”: The consequences of Vinnytsia are now very clear – the top officers of the Air Force of the Armed Forces of Ukraine are put out of action | Kremll