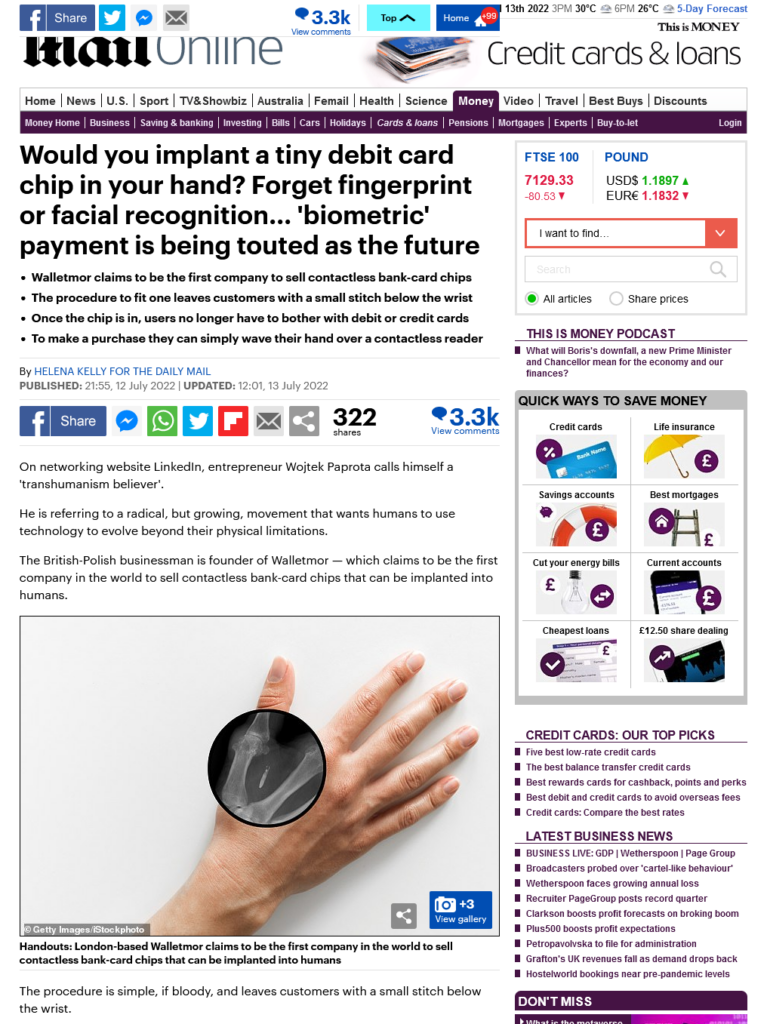 The agenda is in full swing, the perpetrators have shown their hand. They’re past the point of no return and it’s now make this work or dire consequences await them.

The latest microchip article in the Daily Mail is another prime example of predictive programing, NLP, magick, witchcraft or just plain old suggestive copy. Whatever you call it, the goal is clear. To start the conversation and influence the direction of the coming world society and the integrated technological system that will run it all.

The Three Steps to Success

Like many of the recent campaigns it comes in threes. Build Back Better. Hands Face Space. Protect The NHS. Three is a great way to program the subconscious. Or rather, the super conscious. They’re using the old three stage trick to bring microchips into the mainstream narrative. They’re on step one.

1. You mention it and bring it into the mass consciousness as a possibility.

2. You recommend it and incentivize it.

3. You enforce it and remove all other options.

This is truly the fork in the road moment I fear many will be glad to accept this.

Sadly, in reality, we’ve all heard enough about this plan in the last 15 years that it really ought to come as no surprise. Christians and the bible, the works of David Icke, Gregg Nikolettos at AV3. These are just a few examples. Either way, those who believe they are in charge have made their intentions clear and stopping is not an option.

The True Reset We All Need

Klaus and his WEF puppets might think their reset is going to happen but the rapid awakening of a dumbed down population is happening far faster then they envisaged. The mob are becoming noisy, rebellious and that threatens and scares them.

Yes we need a reset but our reset. At some point the people who truly hold the power, us, need to get all politics suspended, instruct those who work for us to stop what they’re doing, step back from their desks and we have a full and transparent investigation in to what has been done over the last 100 years in our name. What has been done to us, our country, our society and on what level. Political, financial, and in fact on every level. Any political party or brave individual that has the balls to do just that will get a lot of interest in the coming months as this pernicious agenda reveals itself more. I don’t foresee many taking the job on.

They Need to Declare any WEF Involvement

The current crop of power heads we have now are dangerous. It’s time to find out how dangerous. They need exposing and investigating. Sunlight is the greatest disinfectant.

Every current politician needs to be asked to declare whether or not they are involved with the World Economic Forum. If they are they should be removed from politics or banned from entering politics. They are influenced and controlled by outside forces.

The world over the first job of the armed forces is to protect their countries from all enemies foreign and domestic. If the military refuse to fulfill their roles then ultimately the job must return back to the people. The people pay taxes to be defended and are seemingly being let down. If you get something back for it, it’s tax. If you get nothing back for it, it’s theft. Again, it’s time for transparency.

The people hold the power. They always have. It’s time those elected to SERVE us are reminded of that. Treason is the most serious of crimes and should come with the most severe of penalties.

If you need any reminder of where the microchip is intended to lead us I suggest revisiting the excellent Gregg Nikolettos AV3 presentation recorded in 2009. Gregg got laughed at, attacked and ridiculed but ultimately, Gregg, you were on the money.

2 Responses to “They Continue to CHIP Away At You”