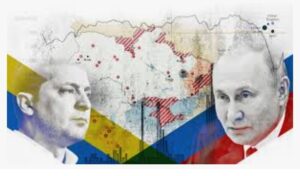 NATO Secretary General Jens Stoltenberg may have said the quiet part out loud on Wednesday when he revealed to reporters that NATO’s push into Eastern Europe since 2014 was done specifically with Russia in mind.

The NATO chief went on to insist that Russia has been “using force in the eastern Donbass since 2014.”

What he neglected to mention, though, was the role Western powers played in the outbreak of civil violence in Kiev on February 24, 2013 that led to the Maidan coup and, ultimately, to the current situation. The US and its influence on the ground in Ukraine, channelled through “civil society” groups it bankrolled, was largely responsibility for that mess.

Even Victoria ‘F**k the EU’ Nuland (then-US assistant secretary of state for European and Eurasian affairs) admitted as much in April 2014 when she said Washington had invested $5 billion dollars into “spreading democracy” in Ukraine – apparently because such efforts worked so well before.

Russia’s greatest ‘crime’ at the time was to provide an alternative route to national development for Kiev. The US Diplomatic Forces flew into swift action on November 21, 2013 when the government of then-Ukrainian president Viktor Yanukovych made the sudden decision not to sign the European Union-Ukraine Association Agreement (AA), which the West had been insisting upon, opting for closer ties to Russia and the Eurasian Economic Union. Here is where all the talk about “building democracy” was exposed as the lie it was.

“It would be a huge shame to see five years of work and preparation go to waste if the AA is not signed in the near future,” Nuland said at the December 13, 2013 US-Ukraine Foundation conference. “So it is time to finish the job.”

That sounds more like an implicit threat than any sort of call to democratic principles. As Ukraine would soon discover, Washington considers as ‘democratic’ only those countries that obey its will.

While Nuland was taking multiple trips to Kiev in the midst of the Maidan melee, passing out snacks alongside John McCain and the US Ambassador, very strange things were happening that have never been adequately explained.

To this day no definite result has come from investigations into the infamous ‘Maidan snipers’ that killed dozens of both protesters and police officers. Conflicting reports and claims by various sides name them as working for the embattled government, the protesters, Russia – all in the name of stoking tensions further. According to some of the snipers themselves, they received direct orders from a US officer. Would that be something that NATO (or someone linked to NATO) could have sanctioned? It’s impossible to say with any certainty, but the killings went far towards enraging the masses, which ultimately drove Yanukovych out of the country.

Meanwhile, Reuters, then not yet so sure of Kiev’s innocence, asked (back in 2014) why no one was charged with killing policemen, especially when it is considered that the prosecutors and the minister in charge of the investigation all played a part in fueling the uprising. By way of evidence, the General Prosecutor of Ukraine Vitaly Yarema was videotaped striking a traffic cop in the face during the protests. To what degree was Yarema and numerous other Kiev officials were corrupted and compromised by Western money will never be known, but it’s a question still worthy of asking.

Another thing to question is why the Western media barely reported Kiev’s shelling of the Donbass, home to millions of Russian speakers and passport holders, over the course of the last eight years? At the same time, numerous reports – many of them from Ukrainian citizens caught up in the fighting – describe atrocities and war crimes being committed by Ukrainian forces, many of them outright neo-Nazis, such the Azov Battalion. These forces have been indiscriminately bombing schools, hospitals and residential areas, and, to emphasize, these eyewitness accounts are coming from the Ukrainian people themselves.

Back to NATO and Ukraine. The brutal reality, as summed up by Jens Stoltenberg’s remark, is that Ukraine is already a de facto proxy member of NATO, and has been since at least 2014.

As the scholar John Mearsheimer explained, “The alliance began training the Ukrainian military in 2014, averaging 10,000 trained troops annually over the next eight years.”

The arming of Ukraine happened regardless of who was in the White House. In December 2017, the Trump administration, together with other NATO states, began sending ‘defensive’ weapons to Ukraine, while Kiev took a major role in military exercises held on the Russian border.

The US and Ukraine have been co-hosting Exercise Sea Breeze, yearly naval drills in the Black Sea. The July 2021 iteration was the largest to date, including navies from 32 countries. In September the same year, the Ukrainian army led ‘Rapid Trident 2021’, which the US Army describes as “A US Army Europe and Africa-assisted annual exercise designed to enhance the interoperability among allied and partner nations.”

The key word here is “interoperability,” which would give ‘non-NATO partner’ Ukraine much of what was already being given to regular paying client states. Yet Ukrainian President Volodymyr Zelensky just keeps asking for more, and NATO is happy to oblige.

Zelensky performs with his group prior to becoming President (2014)

Some may argue that Ukraine was absolutely right to join forces with NATO, considering that Russia had ‘annexed’ the Crimean Republic and absorbed it into its ‘empire’. That’s the view being sowed across NATO and its partner states. In reality, the Crimean population held a democratic referendum that asked whether they wanted to rejoin Russia as a federal subject, or if they wanted to restore the 1992 Crimean constitution and peninsula’s status as a part of Ukraine.

The result should have silenced the critics, but instead it just infuriated them more: a 97% vote for integration of the region into the Russian Federation with an 83% voter turnout. Consequently, President Putin signed a decree, after its formal ratification in the State Duma, recognizing Crimea as a sovereign state –without so much as a drop of blood being shed.

It would take a dyed-in-the-wool Russophobe to take in all of the above and not, at the very least, understand why Russia launched its special military operation in Ukraine.