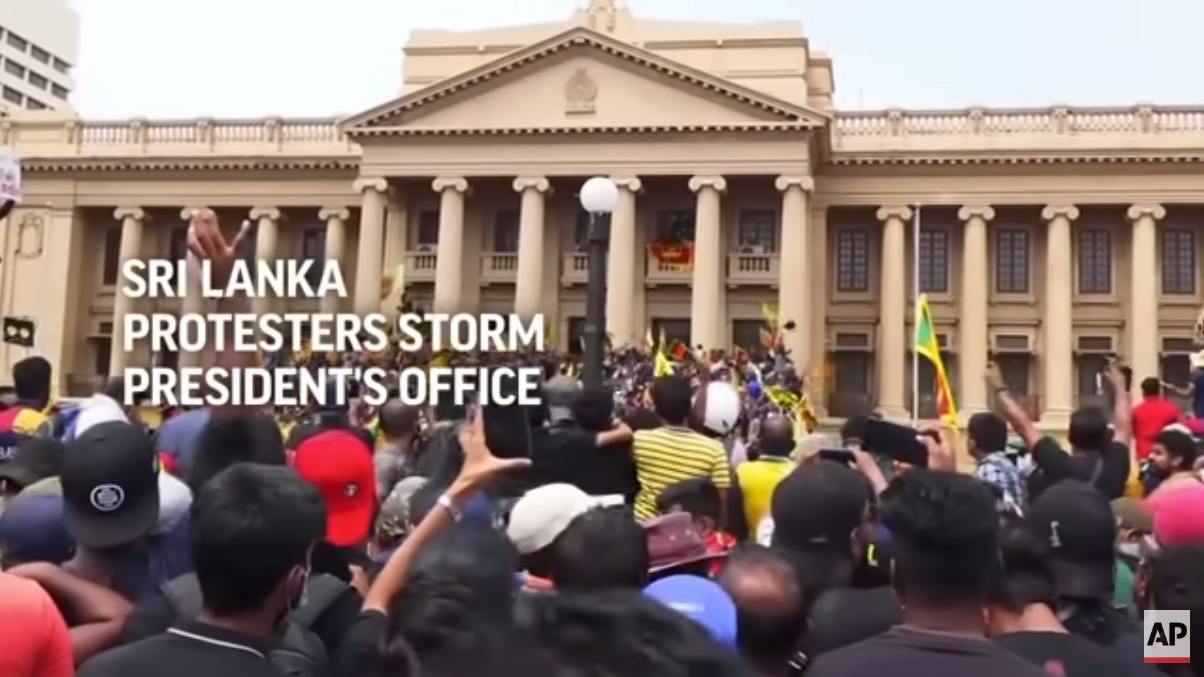 I don’t believe any single country is the “model” for the New World Order because so many countries are neck deep in Klaus Schwab’s World Economic Forum-driven madness that’s referred to as the Great Reset.

But Sri Lanka is certainly one nation to watch. Its corrupt puppet politicians, just like those in Canada, New Zealand, Australia, the U.S. and Europe, have been in a race to the finish line of Schwab’s dystopian global technocracy, which is the final destination, a truly dark place of total surveillance and soul-crushing control over all human activity.

All resisters will be dealt with harshly as we’ve seen from the J6 protest here in America and the truckers’ uprising in Canada.

But maybe, just maybe, the resisters in some of these countries will find a way to tap into the fury that is rising up among the people and throw off their shackles.

It will be interesting to watch Sri Lanka as it seems things may be coming to a head there faster than anywhere else.

Since this spring, people on the island nation formerly known as Ceylon have been dealing with gas shortages, power outages, high inflation, food riots, and runs on the banks. I have sources inside the country feeding me information, so this is not third-hand information, it is straight from the native people living through what is an intensifying powder keg.

As early as May 9, my source told me of spreading food riots and “people are killing each other on the streets.” This led to curfews and planned power outages.

Since then it’s only gotten worse.

Today, there are reports that protesters have breached the Temple Trees, which is the official residence of Prime Minister Ranil Wickremesinghe.

Then they stormed the president’s office, watch below.

Sri Lankans also broke into the gates of the country’s central bank.

Why is this happening?

The nation has been driven into bankruptcy by its corrupt leaders. People have been left without fuel and food. They have had enough and many are at their breaking point, a point at which you realize you have nothing to lose by going on the offense against the gangsters who have destroyed your country.

Here’s another video where they have breached the president’s residence demanding his resignation.

I heard from my most trusted source today inside Sri Lanka, who said people were coming to Colombo, the capital, to participate in these mass protests. Many came packed into cargo containers because almost all of the buses and passenger trains have run out of fuel.

Some walked up to 100 kilometers to participate in the protests in Colombo.

Here are pictures the Sri Lankan citizen sent me of the people who were lucky enough to get on the limited number of buses that still had fuel.

“Please write an article of our country’s situation,” my Sri Lankan friend asked me. “This is probably the start of everything for other countries through the Great Reset. Our PM Ranil is a Freemason and a member of the WEF.”

We have reports today that Sri Lankan President Rajapakse is fleeing the nation aboard a naval vessel.

I asked my source about this.

“Yes it happened. We all saw it on TV,” was the reply. “We don’t know where the president is right now.”

What about the prime minister, Ranil, I asked. He is the notorious Masonic traitor and disciple of Klaus Schwab at the World Economic Forum.

“Ranil is saying he will resign once a national government is formed,” I was told, although this is being taken with a large grain of salt by Sri Lankan citizens who have lost patience with Ranil and don’t believe a word he says.

Ranil reportedly signed an agreement with the WEF in 2016 that placed him under the wing of the globalists. He is a puppet politician (sound familiar, Canadians, Americans, Europeans?) who does not answer to his citizens. He answers to foreign entities in London, New York, Brussels and Davos.

We have unearthed a video of Ranil speaking at the WEF in 2016 (see below), where he refers to a bailout from the IMF and pledges his fealty to the globalists under a “restructured” economy.

At around the 7-minute mark of this video (see below), a Chinese reporter asks the Sri Lankan PM about his country’s role in the WEF-facilitated “Fourth Industrial Revolution” and how China fits into that plan. In his answer, Ranil displays his willingness to pimp his country out to the Chinese Communist Party, offering “large infrastructure projects funded by the Chinese government.” This includes giving the Chinese communists rights to develop a port city in Sri Lanka.

Ranil said he would also like to see Chinese investments in his country, which of course always come with a price tag, in the form of influence over government policies favorable to the Chinese. That’s exactly how it’s worked in the United States, where U.S. politicians, business oligarchs and media outlets get paid handsomely to sell out their country’s working-class citizens.

In the above video, Ranil states:

“Infrastructure development alone is not sufficient. Now we are discussing Chinese investment… and the Chinese government has also decided that some of its manufacturing industries should move out, and Sri Lanka seems to be one of the locations for the industries to move out. So we are looking for the Chinese participation in the logistics hub of Sri Lanka as well as further investments in the real estate sector.”

So everything is in flux. The world is on fire. Protests are heating up. But until I see the puppet politicians being hauled out of their offices and palaces in handcuffs, I am cautious not to get too optimistic. I remain skeptical that the network of global predators are losing control of the power structures they have taken over through stealth and subterfuge over the last 100 years.

“Who is like the beast and who can fight against it?” the apostle John asks in the 13th chapter of Revelation. If we are living in the end times, this just might be the beast system that takes over the world. In which case, we await our King who will arrive shortly on the scene, at which time every knee will bow and tongue confess that Jesus Christ is Lord of all.