The Russian military has withdrawn from a Black Sea island it captured, claiming it was for the sake of grain freight traffic 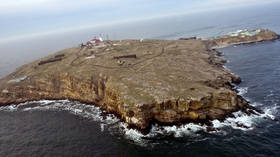 Russian troops were withdrawn from Ukraine’s Snake Island on Thursday, the defense ministry announced during a daily briefing. The move was described as a goodwill gesture meant to alleviate concerns over Moscow allegedly blocking attempts to haul grain out of Ukraine.

“This demonstrated to the international community that the Russian Federation does not hinder the UN effort to organize a humanitarian corridor to ship agricultural products from the Ukrainian territory,” Col. Gen. Igor Konashenkov, the spokesman for the ministry, said.

Konashenkov assessed that with no Russian presence on the island, Kiev would find it more difficult to accuse Russia of exacerbating the global food crisis by citing the Russian Navy’s control of the northwestern part of the Black Sea as a roadblock to the movement of grain.

“The ball is now in the court of the Ukrainian side, which would not remove mines from its Black Sea coast, including the areas near ports,” the Russian official said.

Western nations and Ukraine have been accusing Russia of blocking seaborne exports from Kiev-controlled ports like Odessa, claiming that it was a major factor of the global hike in food prices. 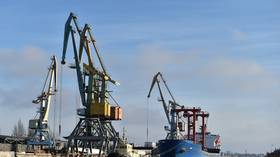 Moscow has denied the allegations, saying that its Navy offered safe passage to civilian ships. It’s Ukraine, Russia insists, which has prevented foreign ships from arriving and leaving its ports. Ukraine’s use of old sea mines, which are prone to coming untethered during storms, created a major problem for traffic, Moscow argued.

Russia captured Snake Island, which is located 35 kilometers off the Ukrainian shore near its border with Romania, in the early days of its attack on Ukraine. Ukrainian President Volodymyr Zelensky initially claimed that border guards defending the territory had all been killed after defying overwhelming Russian forces. It later turned out they’d actually surrendered.

Kiev reportedly launched at least two major attempts to retake the island from Russia. Russian troops reported inflicting serious damage on their opponents in both cases. Moscow rebuked the Ukrainian operations as senseless attempts by the Ukrainian government to score publicity points.

Russia sent troops into Ukraine on February 24, citing Kiev’s failure to implement the Minsk agreements, designed to give the regions of Donetsk and Lugansk special status within the Ukrainian state. The protocols, brokered by Germany and France, were first signed in 2014. Former Ukrainian President Petro Poroshenko has since admitted that Kiev’s main goal was to use the ceasefire to buy time and “create powerful armed forces.”

In February 2022, the Kremlin recognized the Donbass republics as independent states and demanded that Ukraine officially declare itself a neutral country that will never join any Western military bloc. Kiev insists the Russian offensive was completely unprovoked.