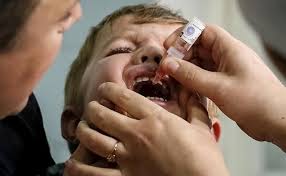 The UK Health Security Agency (just how many of these health organisations are we paying for?) has declared a national incident and warned that parents must check that their children are vaccinated against polio after traces of the virus were detected in Britain’s water system.

It’s difficult to avoid the suspicion that this could be just a scam to persuade more parents to have their children vaccinated against polio. (Like most people, I no longer trust anything that comes from any quango, government advisor, minister or government department.)

But one or two things are worth mentioning.

First, polio was officially eradicated in the UK in 2003. So, why are the authorities still vaccinating children against a disease that was eradicated 19 years ago? (Actually, the last case was in 1984 – nearly 40 years ago.)

Second, the UK HSA suspects that a person vaccinated abroad with the oral polio vaccine (which contains a live virus) entered the UK and spread the infection.

Third, it has been well known for some time the polio outbreak in Africa is largely a result of the Gates’ polio vaccination programme. I revealed this nearly two years ago. Even the WHO admitted that there were vaccine derived polio outbreaks in Africa. The vaccine used there contains an attenuated or weakened virus. This weak virus is still alive and can cause disease. (I suspect that the mainstream media such as the BBC won’t allow discussion of this because to do so would be to venture into ‘anti-vax’ territory. As I have reported before, the BBC, which I regard as a propaganda organisation masquerading as a news organisation, refuses to allow critics of vaccines on their programmes `even if they’re right’.)

Fourth, as I have been warning since the early 1980s, drug residues and viruses can get into our water supplies from our sewage systems. Waste sewage (sometimes treated, sometimes not) is discharged into rivers. Actually, it doesn’t matter whether or not the sewage is treated because the purification programmes cannot remove these tiny particles. And fresh drinking water supplies are then taken out of the rivers into which the sewage had been dumped. (For more about this take a look at my book Superbody.) And that, I suspect, is how Bill Gates’ polio has got back into Britain. Now that it’s here, it could be very difficult to get rid of it.

Was all this accidental?

I don’t think I am being unduly cynical to ask if this could be part of the plan to create chaos, encourage mass vaccination programmes and, ultimately, reduce the global population?

`Superbody’ by Vernon Coleman is available as a paperback and an eBook.

5 Responses to “Polio Back in UK – but is it thanks to Bill Gates?”