Amazing powers being granted to Poland to run Ukraine.  Poland asking Norway to give them free oil…because of Putin.  Poland struggling to get oil and gas after breach with Russia.  Reality is starting to hit home, and the Polish PM is taking it out on Norway!   Where will the insanity end?

Western media is looking for an off ramp from Ukraine.  Taiwan next?  Monkey pox?  These two narratives could take over.  Belgium has started a quarantine for monkey pox.  Poland will left holding the bag.  The hysteria has got into the Polish leadership.

Clown World section is always fun on Alex’ reports.  Ukraine Parliament bans the use of the letters ‘ Z and V’.  Ladimir Elenski. 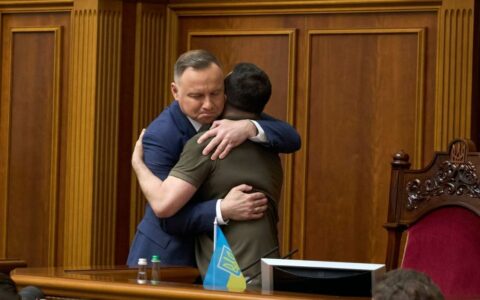 Ukraine, being a victim country, is in an active search for allies and companions. Poland has become one of the Kiev’s main allies, but the true interest of Warsaw is to support the national interests of the country, not the protection of the Ukrainian people.

Poland has a rich historical heritage, with which it approached the 21st century. It was divided three times in history. In the 20th century, Poland managed to regain its western lands, but not its Eastern territories. The prospects of the return of the Eastern lands for Poland are beginning to emerge more clearly.

On May 22, Olga Sovgirya, a representative of the Verkhovna Rada in the Constitutional Court, claimed that Ukrainian President Volodymyr Zelensky announced that he would soon submit to the parliament a bill to grant Polish citizens a special legal status in Ukraine, similar to the Polish law on support for Ukrainian citizens. Volodymyr Zelenski thanked the Polish Sejm for passing the law on assistance to Ukrainian citizens and expressed hope that a similar document would soon be adopted in Ukraine.

Vladimir Zelensky said: “This is a great step and a gesture of a great soul, which only a close friend of Ukraine is capable of. And this step will not remain one-sided. Soon, I will submit a similar – mirroring – draft to the Verkhovna Rada of Ukraine. God forbid that Polish citizens will never need all these benefits in such conditions, in war conditions, or in their lives. But these laws have a great symbolic value, showing that Ukrainians and Poles are kindred and equal. And I am sure that the parliamentary body of Ukraine will support this law – quickly and by a clear majority.

The press secretary of the president of Ukraine, Sergey Nikiforov, shared information about this law. He said that the draft is under development and will be similar in function to the Polish one, as refugees from Ukraine have been equated with Polish citizens, but the only thing Ukrainians will not be able to do in Poland is vote. Poland has granted more than 3 million Ukrainian refugees the right to live, work and claim social benefits.

On May 22, Polish President Andrzej Duda came to Kyiv and discussed this issue with the Verkhovna Rada. He urged the citizens of Ukraine not to give up a single piece of Ukrainian land.

He said: “Alarming voices have appeared saying that Ukraine must yield to Putin’s demands. Only Ukraine has the right to decide its future. Duda supported Ukraine’s accession to the European Union and offered to conclude a new treaty on good neighborliness. He also noted that NATO is threatened by a potential threat from Russia”.

At the beginning of May, the Polish leader expressed the hope that there would be no border between Poland and Ukraine, and that the countries would live in peace and kindness. Now the Polish president hopes that Ukraine will return to its territory.

The Kiev’s bill is still under development and the Verkhovna Rada is working on it, but it is already known that Poles will have the right to work, the right to tax residency status, and social protection. Also, according to unconfirmed information, some rights will be extended.

Poles on the territory of Ukraine will receive possible special rights:

Poland has been involved in the Ukrainian crisis since 2014. Polish soldiers took part in combat operations in Ukraine. Moreover, it is worth noting that a month earlier, Poland had provided military equipment (sniper rifles, tanks, and spare parts for aircraft) to Ukraine. This situation can be characterized as barter: Poland provides material means, while Ukraine provides political means. At the moment it is known that so far the project is based on goodwill and mutual assistance, but it cannot be ruled out that this type of cooperation will develop into deeper cooperation.  Russia has lost an opportunity to prevent Ukraine from falling under Polish influence. In the end, Poland’s soft power prevailed.

Today, the question of Ukraine’s sovereignty emerged. In the future, it may lose some of its sovereignty by joining the EU or lose it completely by merging with Poland. At this point, it would be wrong to make clear predictions.

Earlier, Russian presidential aide and head of the Russian negotiating delegation to Ukraine Vladimir Medinsky said that “Poland will snatch the western Ukrainian lands from Ukraine’s friend at the first opportunity”.

Since the start of a special military operation, Poland has taken in about 3.5 million Ukrainian refugees, more than all other European countries. The UN said that about 6.4 million citizens have left Ukraine. The huge number of Ukrainian refugees in Poland justifies the reason for the creation of this bill.

These steps lead to the creation of a single state, to the creation of the latest version of the “Rzeczpospolita”. Poland’s interests are based on revanchism and a policy of soft power. The Ukrainian authorities transfer territories to the Polish administration in the hope that this will save Ukraine from Russian aggression. This poses the threat of Poland going to war, which could lead to further repercussions and an increase in the scale of the war.

One Response to “Polish takeover of Ukraine is dangerous for both”