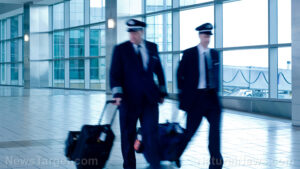 A nationwide pilot shortage largely caused by Wuhan coronavirus (Covid-19) “vaccine” mandates has many airline carriers considering a decrease in training standards as the solution.

Because many seasoned pilots became injured or are now dead because of the injections – or retired early in order to avoid being forced to take them – the airline industry is now short on employees to fly planes. As a result, the transportation sector wants to make it easier for new pilots to get licensed more quickly with fewer training hours.

This threatens the safety of passengers, of course, but it is the price that the general public may need to pay in order for airline carriers to stay in business – otherwise the industry could collapse.

According to reports, the number of flying hours required to become a commercial airline pilot would be halved. This is known as cutting corners, and it could be coming to an airline near you.

“The pilot shortage for the industry is real, and most airlines are simply not going to be able to realize their capacity plans because there simply aren’t enough pilots, at least not for the next five-plus years,” said United Airlines CEO Scott Kirby during the company’s recent quarterly earnings call.

Alaska Airlines CEO Ben Minicucci said much the same in a recent YouTube video, apologizing to the public for having to cancel many flights in recent months due to the pilot shortage.

“We had 63 fewer pilots than what we planned for when we built our schedule,” Minicucci said, adding that this has caused a “ripple effect” throughout the company that requires more extreme response measures.

“By the time we caught this error, April and May schedules were bid on by our pilots and flight attendants, making it impossible to sufficiently adjust schedules to avoid cancellations.”

In addition to making it easier for any random Joe to get a pilot license with fewer hours, some in the airline industry are also dropping the longtime requirement that pilots have a college degree in order to fly airplanes.

Sen. Lindsey Graham (R-S.C.) also wants to increase the pilot retirement age from 65 to 67, which would keep older pilots up in the air for several more years than is currently allowed.

Delta Airlines announced back in January that it is increasing pilot pay and offering large sign-on bonuses to new pilots. The company is also axing the requirement that pilots hold a four-year college degree.

“While we feel as strongly as ever about the importance of education, there are highly qualified candidates – people who we would want to welcome to our Delta family – who have gained more than the equivalent of a college education through years of life and leadership experience,” the company announced.

Meanwhile, some of the families of passengers who have died in air crashes are speaking out against the changes, warning that they could lead to more accidents in the air that cost more lives.

The 2009 crash of Colgan Air 3407, for instance, is the reason why the number of flight hour requirements to become a pilot increased to 1,500 hours in the first place. Now, several carriers including Delta, American, United, and regional carrier Republic Airways want to halve that number to just 750 hours.

“While anyone can request an exemption, it does not mean it will be granted,” said the Federal Aviation Administration (FAA) in a statement following a request from Republic to halve the existing flight hour requirement.

To keep up with the latest news about the implosion of the global economy, be sure to visit Collapse.news.

4 Responses to “Airlines looking to CUT required training hours for new pilots due to desperate shortage of pilots… whom they killed with covid vaccines, of course”