Ukrainian prisoners are allowed to call their relatives and notify them that they are still alive. In fact, unlike their Russian counterparts, captured Ukrainian PoW’s that are cleared of war crimes are already participating in the clearing of rubble and destruction to clean up cities affected by the war. 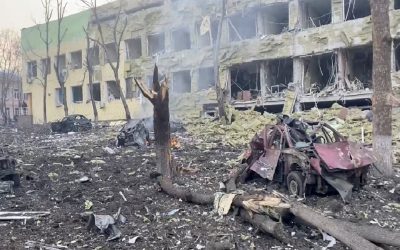 Although the neo-Nazi Azov Battalion and other elements of the Ukrainian military are only holding onto a few key areas of Mariupol, Kiev stubbornly does not recognize their inevitable defeat in the port city. Kiev carefully hides its own losses and forces its troops to continue resisting and suffer unjustified losses despite not even having enough ammunition or infantry to continue the battle.

As far back as April 11, writing on Facebook, the Ukrainian 36th Brigade admitted that all infantry soldiers had been killed and that “shootings battles” against Russian forces were now being conducted by artillerymen, anti-aircraft gunners, radio operators, drivers and even the cooks and musicians from the orchestra.

Over a week later and the number of Ukrainian servicemen who remain in Mariupol is not exactly known. According to Russian intelligence, no more than 700 Ukrainian fighters remain inside the last pockets of resistance, including about 200 foreign mercenaries. They hide in the underground facilities of the Azovstal plant with little to no ammunition, medicine and provisions.

Despite having obviously lost contact with its own forces and not wanting to admit the impossibility of their evacuation or sending military reinforcements to help them, Kiev declared the continuation of resistance to the bitter end. In effect, Ukrainian authorities have doomed their soldiers and foreign fighters to a senseless death unless they as individuals make the decision to surrender.

On April 11, during a failed breakthrough, three tanks, five infantry fighting vehicles and seven armored vehicles of the Ukrainian Armed Forces were destroyed. As of April 14, 2,673 people surrendered to the Russian military in the Greek-founded port city, the largest number of people who surrendered since Russian military operation in Donbass began in February.

Although Kiev’s forces have openly announced they will commit war crimes by killing Prisoners of War (PoW) and wounded Russian soldiers, with a video appearing online on March 28 of Ukrainian soldiers doing exactly that, other videos show Russian soldiers feeding captured Ukrainian troops, something that would certainly not appear in the mainstream Western media.

With Western media not reporting as such, this information is still distributed through Ukrainian social media and has resulted in thousands surrendering. Even Western media are struggling to find evidence and testimonies of Ukrainian soldiers being tortured, beaten or humiliated. This is strikingly different from the massacres perpetrated against Russian and Donbass forces.

Ukrainian prisoners are allowed to call their relatives and notify them that they are still alive. In fact, unlike their Russian counterparts, captured Ukrainian PoW’s that are cleared of war crimes are already participating in the clearing of rubble and destruction to clean up cities affected by the war.

At the same time, the Armed Forces of Ukraine have much greater capabilities, firepower and technical means than the National Guard, and therefore the damage from the actions of the Army in Donbass is much greater. Ukrainian artillerymen have been targeting and killing civilians in Donbass for years,.. This has been extensively reported on by human rights organizations and the United Nations but sidelined and ignored by Western media.

Measures like releasing Ukrainian prisoners to their families after writing a receipt/contract stating that they refuse to participate in further hostilities and pledge not to fight again, so long as they had not previously committed war crimes, may look naïve but it is with the hope of minimizing casualties on both sides and deradicalizing the Far-Right Kiev regime.

Despite the reality that Mariupol has effectively fallen, Kiev is still unwilling to announce a surrender of its forces in the city, effectively dooming hundreds of Ukrainians and foreign fighters to their death. It is not known why Kiev insists on fighting to the last man in Mariupol, but after eight years since Donbass forces failed to capture the city, the domination of the Azov Battalion has effectively come to an end.

Although ignored by Western media, witness testimonies show that the Mariupol-based Azov Battalion enforced Ukrainization on the city’s inhabitants, so-much-so that those speaking Russian were fined, and in the most extreme cases executed, as happened to an ethnic Greek only 10 days before the Russian military operation began on February 24.

With Kiev unwilling to backtrack on its racist extremism and insistence on indiscriminately targeting Donbass civilians, emboldened by the idea that it would have the complete backing of the West, Ukraine has now completely lost access to the Azov Sea with the Russian capture of Mariupol.