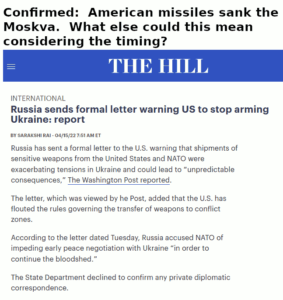 This letter comes on the back of the sinking of the Moscva.  You might take it as a warning that next time the US or the UK provides targeting data to Ukrainian missile systems, there could be a military response.  The best way to respond according to Jim Stone would be to sink every ship in NATO’s navies using the advanced weaponry at Russia’s disposal.  Writing a letter proves that Russia doesn’t want to do this, or the Russians would have done it already.

If this happens, and NATO then declares open war on Russia, the next job would be to destroy NATO’s air forces.

As regards land armies, compared to Russia, and China, NATO doesn’t have one.

Once all air and naval power of NATO is destroyed, the Russians or Chinese can walk across Europe and take a cruise around Britain at their leisure.

If this plan doesn’t work too well, then Russia has its nuclear missiles ready to persuade NATO to leave Russia alone.

So what are we doing?  Ruining peace negotiations between Russia and Ukraine, prolonging the agony, and supplying advanced weaponry to Ukrainian NAZIs.

The above text box comers from Jim Stone www.jimstoneindia.com

The only thing that puzzles is why is the West actively pursuing a nuclear war.