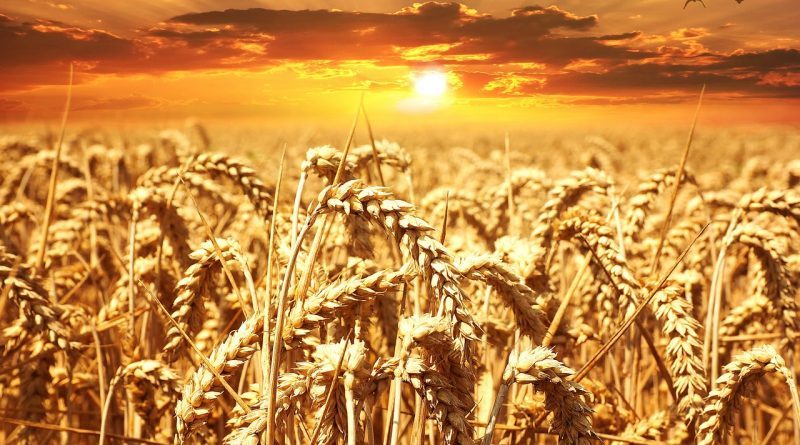 (ZH) Ukraine, known as the “breadbasket of Europe” given it’s long been among the world’s top ten wheat exporters and supplied over $6 billion in agricultural products to the European Union in 2020, has issued an emergency order Wednesday banning the export of grains and other products.

The ban includes the export of wheat, oats, millet, buckwheat, sugar, live cattle, meat, and other products considered vital to the global economy. But amid wartime, and with Ukraine’s government saying many of its citizens are now starving under Russian siege, Ukraine’s minister of agrarian and food policy Roman Leshchenko said the drastic action was taken to avert a “humanitarian crisis in Ukraine,” stabilize the market and “meet the needs of the population in critical food products,” according to the AP.

With food prices already soaring, it’s expected the move could hit already struggling populations from Lebanon to Syria to Africa the hardest.

“Russia and Ukraine together supply nearly a third of the world’s wheat and barley exports, which have soared in price since the invasion,” the AP underscores. “The products they send are made into bread, noodles and animal feed around the world…”

The United Nations Food and Agriculture Organization has listed Russia as the globe’s top wheat exporter in 2020, while Ukraine was the fifth largest. China and India rival Russia’s production, but both countries consume most of what they produce domestically. 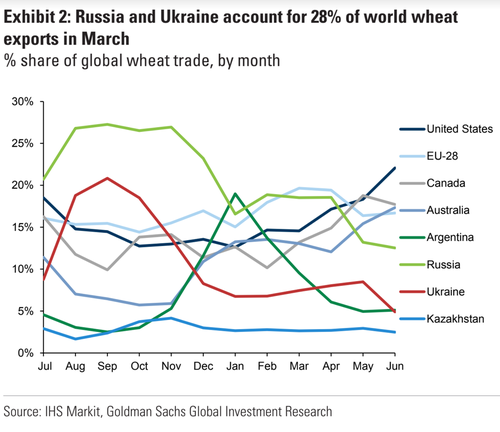 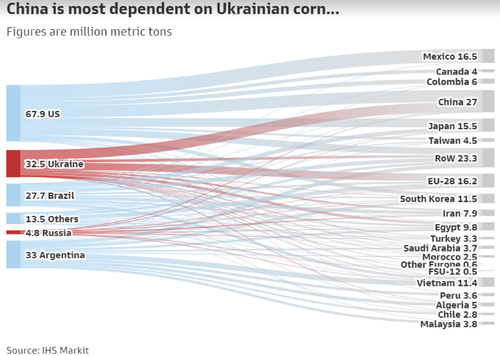 Ukraine is also a major global supplier of corn and sunflower oil, vital for cooking oil. Here’s more the potential impact of the war, via Yahoo Finance:

As for Ukraine, the market has adjusted to the probability that wheat harvested and stored last season won’t be shipped, Gilbertie said. What’s now in question is what happens to the wheat currently in the ground. It’s mostly winter wheat, he said; it’s planted in autumn, then sprouts, grows and is harvested in spring.

“What the market’s trying to do is price in the potential of there not being a harvest season for wheat, and not being able to get the wheat out of the fields and/or shipped out of Ukraine,” he said.

Crops like sunflower and corn are planted in spring, so it’s unclear whether farmers will be able to plant at all, between the Ukrainian war draft, the invasion itself, and supply shortages of fuel and fertilizer.

The same expert, Sal Gilbertie, CEO of Teucrium, said of the potential long-term effect that both the war and international sanctions on Russia could have: “It is a biblical event when you run low on wheat stocks. You won’t see a global food shortage. Unfortunately, what you’re going to see globally is that billions of people might not be able to afford to buy the food.”

And Fox Business summarized that combined, “Russia and Ukraine account for around 29% of global wheat exports, 19% of global corn supplies, and 80% of the world’s sunflower oil exports.”