“Svatovo is blocked, fighting for Severodonetsk ongoing,” he said speaking at the Russia 24 TV Channel.

On February 24, Russian President Vladimir Putin announced a special military operation in Donbass to protect residents of the region from Ukrainian aggression and called on Ukrainian troops to leave the combat zone. Earlier, the Heads of the Lugansk and Donetsk People’s Republics Leonid Pasechnik and Denis Pushilin requested the Russian president to provide military assistance.

The Ukrainian government launched the so-called anti-terrorist operation against Donbass in April 2014.  The members of the Contact Group have announced ceasefire more than 20 times since the autumn of 2014. Kiev forces regularly violated the truce, opening fire with large calibre artillery, mortars and tank guns which were to have been withdrawn from the contact line under the accords. *t 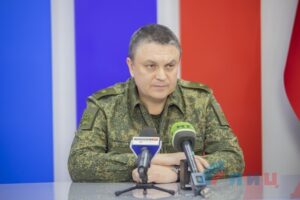 Russell Bentley says DPR contingents have advanced thirty miles since yesterday into Ukraine.  Yet Donetsk the city is being heavily shelled killing many civilians.  Russia is helping DPR troops to get across Ukraine and stop the shelling of civilians.  Casualties on both sides.   Ukrainian casualties heavier by 5:1.  Many Ukrainian troops are conscripts coming to the front for the first time.

Ukraine is going to be liberated and de-nazified.  The vast majority of the POWs will be put into labour battalions.

The DPR has moved out into Ukraine, out into open agricultural land.  In the city areas the DPR and LGPR have not moved out of the front lines.  This is to avoid fighting in populated areas.  The Ukrainians are siting their weaponry alongside people’s homes.  Their main strategic technique at this point is using human shields.  The Ukrainians are not allowing humanitarian corridors.  They are shooting whole families who try to leave the cities.

The Russians are surrounding cities for this reason.  Scott Ritter is a good source and more qualified than me says Russell.  He claims that large Russian formations are moving towards Kyiv.

Download the video as it will be wiped soon enough.  Tears of joy from the liberated.