Get clear about this. This is orders from the WHO taking precedence over orders from national governments. 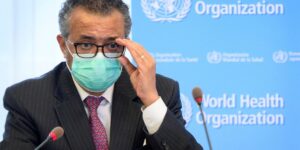 Termites don’t sleep. They just keep eating, and they do all their work in the dark. They avoid light at all costs. Ignore them and they’ll eat your house down.

What’s the best way to get rid of termites? Simple answer. Sunlight.

Great events in world history usually camouflage other great events which usually remain uncovered until the damage they intend to do is done.

Contemplate if you will what well might be the most important question in world history.

Did Vladimir Putin’s stunning decision to invade Ukraine to take out America’s lethal biological weapons labs actually save the world from the sudden stealth imposition of a one-world government?

In the shadow of the Ukraine war, the WHO is preparing – unnoticed by the public – an “international agreement on the prevention and control of pandemics” binding under international law.

The negotiations in Geneva have already begun. Originally, the “transfer of power” was planned for 1 May 2022, i. e. all 194 member states of the WHO would then be forced to implement the measures decided by the WHO, such as lockdowns or general compulsory vaccination.

However, a new memorandum from Concilium Europa, dated 3 March 2022, has delayed the process considerably.

Meanwhile, a working draft of this new WHO “World Government Agreement” is planned to be ready for further internal negotiations on 1 August 2022. See this.

“An international treaty on pandemic prevention and preparedness“

Now that their first plandemic has fizzled out because of millions of unnecessary deaths by treatments now exposed as techniques of medical poisoning for pharmaceutical profits producing 1,271 different diseases, ole Klaus and his well trained political flunkies deployed in many countries around the world plan on making this fake medical attack on the world PERMANENT.

And the only reason the world isn’t going to vote on it on May 1 is because Bad Vlad decided to round up the neocon criminals operating their bioweapon manufacturing labs and white slavery rings in Ukraine.

So as Zombie Joe and his misfit henchman strategize more fruitless insults to Russia and China while ruining the West’s economy at the same time, the Strangelovian saboteurs have been temporarily foiled in their attempt to usurp ultimate power from 194 countries on May 1.

Except for the psychopaths running the COVID scam and stealing people’s bank accounts, almost nobody saw this one coming.

Just imagine. The misanthropes who produced this two-year-long nightmare when they met during Event 201 in 2019 and concocted the scamdemic that shut down the world, ruined millions of peoples’ livelihoods and killed and maimed millions of others, were just about to hold another round of psychotic get togethers to make this nightmare medical chokehold permanent, while simultaneously disempowering every national government on Earth.

Doesn’t that make you feel good about all those responsible leaders you’ve elected to positions of power who take such good care of your health and welfare?

So as the entire world has forgotten about the medical tyranny that has pretty much destroyed their health and their lives for the past two years, and are now bedazzled by the curious events that roughed up Ukraine and split the world apart into two nuclear armed camps all chomping at the bit to annihilate each other, our good diligent billionaire doctors are busy putting the final nails into the coffin of our individual freedom with a document that will take precedence over all the laws our governments have passed during the past several hundred years.

Get a grip on what these well-respected criminals have in mind.

Unelected council gives green light to start negotiations on international pandemic treaty. Read the government doublespeak if you like, but better would be to think about all the things they won’t be discussing, like . . .

So as the world goes ga-ga with all the latest revelations about the circus in Ukraine, it would behoove everyone to stay focused on the medical sabotage of human health in the continuing-to-fester plan of human population reduction that continues to progress in secret and not only neutralize the power and authority of the remaining governmental structures that we still possess, but also continue the ongoing onslaught by billionaire medical scions to reduce the population of the world with programs meant to deceive and poison unenlightened populations.

Another important thing to remember — as if you could actually forget about it — is that this is only one minor subplot in a much larger drama that involves American leaders, because they have been bribed by billionaires both foreign and domestic, deliberately sabotaging their own country, shutting down supply lines, and debasing the currency so that widespread starvation and death as the inevitable future of millions becomes the unavoidable prognosis of the human future as we speak.