On March 21, the Russian Armed Forces announced that they launched a strike with high-precision air-launched cruise missiles on the training center for foreign mercenaries and Ukrainian nationalist formations at the Novaya Lyubomirka combined-arms training ground in Rivne Region. More than 80 mercenaries and nationalists were reportedly eliminated.

Additionally, a strike with cruise missiles destroyed the ammunition depot and the headquarters of the mechanized brigade of the Ukrainian Armed Forcesin the area of ​​​​the village of Selets.

On top of this, a group of Ka-52 and Mi-28N helicopters destroyed 8 tanks, 4 infantry fighting vehicles and 3 armored personnel carriers during night strikes.

Pro-Kyiv sources also reported the destruction of parts of Shopping Center ‘Retroville’ in Kyiv city. Earlier, reports appeared that this area was used as a weapon depot and troop gathering center by Kyiv’s forces. 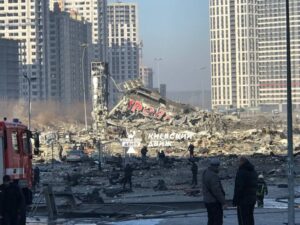