Chairman Robin Tilbrook was invited on RT to talk in regards to what is happening between Russia & Ukraine.

The trouble started when the coup threw out the elected President of the Ukraine in 2014?

Russia could not accept the loss of the Crimea.

Ukraine has not always been a nation state.

Ridiculous reporting such as the proposed reinvasion of Crimea by the West.

Ukraine is not part of NATO so there is no basis for NATO to start WW3 over the Ukraine.

No coverage of the Republics of Donietsk and Lugansk in main media.  Russia Today is far more free speech than English media.

The BBC only reports its own agenda.  Limited reporting of government narrative. 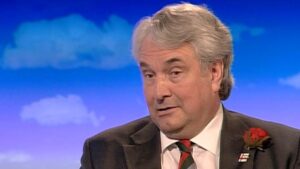 One Response to “Robin Tilbrook on RT – Chairman of English Democrats”