“Please accept my warmest congratulations on your election as Hungarian president. I expect that your activities as president will contribute to boosting mutually beneficial ties between Russia and Hungary. I wish you success, good health and well-being,” the message reads.

Novak, 44, who earlier served as Minister for Family Affairs, will be the first woman to take office as Hungary’s president. She was nominated as presidential candidate by the ruling Fidesz – Hungarian Civic Alliance party led by Prime Minister Viktor Orban.

Novak was elected the country’s president on March 10 and will replace Janos Ader, 62, whose term expires on May 10. 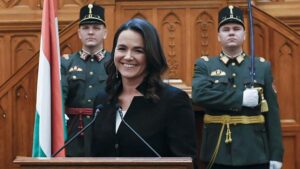