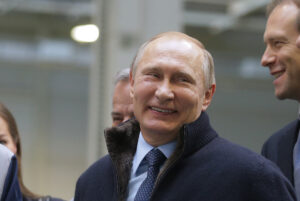 This came from Igori my good friend in Moskva (Moscow).  There are no subtitles but look at the happy faces, the smiles and the energy as the comics lampoon Putin a little.

Say what you like about Putin, and he obviously has to be less than 100% of perfection in some aspects, but he’s got some very good people around him, such as Lavrov, Medvedev and his military commanders. I hope the Russians realise that not all British people are as dumb as the people who have snaked their way into political office in recent times, like dear old Truss.  Our media is pitiful.  Our military men puppets.  Culturally we are no more….well unless someone like the English Democrats brings about a cultural revival.  See end of post.

Blair dumbed us all down, dismantled our institutions and sold us out to foreign influence and control, and the national brain has unfortunately not recovered since.

Putin’s address at the start of the Ukraine operation says it all.

The Russians have certainly spotted that the West is being run by people deficient in ability or brain, which is why they are so confident to take on the awful mess that we are.  They themselves are charming and honourable to deal with in business, if not a little explosive on occasions, especially when they feel threatened or insecure.  Right now they seem cool-headed, and ready to take on the West’s ‘Empire Of Lies’.

The culture and values, experience and traditions of our ancestors invariably provided a powerful underpinning for the wellbeing and the very existence of entire states and nations, their success and viability. Of course, this directly depends on the ability to quickly adapt to constant change, maintain social cohesion, and readiness to consolidate and summon all the available forces in order to move forward.

We always need to be strong, but this strength can take on different forms. The “empire of lies,” which I mentioned in the beginning of my speech, proceeds in its policy primarily from rough, direct force.

This is when our saying on being “all brawn and no brains” applies.

We all know that having justice and truth on our side is what makes us truly strong.

If this is the case, it would be hard to disagree with the fact that it is our strength and our readiness to fight that are the bedrock of independence and sovereignty and provide the necessary foundation for building a reliable future for your home, your family, and your Motherland.

I am certain that devoted soldiers and officers of Russia’s Armed Forces will perform their duty with professionalism and courage. I have no doubt that the government institutions at all levels and specialists will work effectively to guarantee the stability of our economy, financial system and social wellbeing, and the same applies to corporate executives and the entire business community. I hope that all parliamentary parties and civil society take a consolidated, patriotic position.

At the end of the day, the future of Russia is in the hands of its multi-ethnic people, as has always been the case in our history. This means that the decisions that I made will be executed, that we will achieve the goals we have set, and reliably guarantee the security of our Motherland.

I believe in your support and the invincible force rooted in the love for our Fatherland.

I might add that I attended the English Democrats National Conference this week, which has 2000 members and 27,000 regular financial contributors. I would recommend anyone and everyone to join them. They have culture, IQ, humour and would be acceptable to put up to meet the Russians, unlike the embarrassment we currently suffer from in our political ‘leaders’.  The English Democrats would bring peace to the world if elected. The Party has adopted a ‘no more war’ policy which I fully support. Back them. Join them and get active on their behalf. There is no other political organisation which can bring us peace.  The rest including money-man Farage are sold out.

What are you waiting for?

2 Responses to “I love the Russians.”