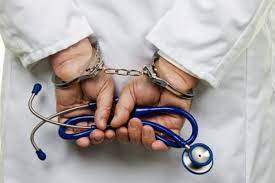 Now that even some of the mainstream media is reporting the fact that the covid-19 jabs are deadly, that they caused around 150 potentially serious side effects and that they have killed umpteen thousands of people, it is worth looking hard at the doctors who gave the jabs.

Doctors have a long, sad history of performing experiments on patients. During World War II, the Pentagon tested mustard gas on American soldiers and in the 1960s, Agent Orange was tested on prisoners.

But in recent decades, even the American military have taken much greater care when testing new products.

For example, during the Serbian conflict in the 1990s, the Pentagon obtained FDA permission before offering troops an experimental vaccine against tick borne encephalitis. Only soldiers who wanted the vaccine were given it.

Every new vaccine that has been produced has been tested (though usually not adequately) and the individuals taking part in the tests have always been informed of the possible side effects – and told that they were taking part in an experiment.

All that changed with the covid-19 jabs.

These jabs were, and still are, experimental.

Patients should have been warned that the jabs were experimental and warned of all the possible side effects.

The dangers of the covid 19 jabs were well documented in 2020. I made several videos in which I explained just what the risks were. I listed myocarditis and blood problems as definite risks.

Here are links to two of the warning videos I made:

But most doctors ignored the evidence and failed their patients in three ways.

First, they failed to warn patients that they were taking part in an experiment.

Second, they failed to warn patients of the possible dangers. Patients should always be told of the dangers – otherwise they cannot give their informed consent to be jabbed or treated. No surgeon will operate on a patient without their consent. No doctor should give a vaccine of any kind without obtaining informed consent. But doctors did not inform their patients of the dangers. And they did not obtain proper consent. They were breaking the medical rules and they were breaking the law.

Third, doctors failed to monitor their patients after they had been jabbed. For a while in the UK patients who had been jabbed were told to wait 15 minutes before leaving in case they had an anaphylactic shock reaction. But eventually even this was abandoned. No long-term monitoring was done. Doctors didn’t seem interested in the fact that they were killing and injuring thousands of patients.

On the 2nd February 2021 – over a year ago – I made a video entitled ‘Doctors and Nurses Giving the Covid-19 Vaccine will be tried as War Criminals.’

Press the link now if you want to watch the video.

There is no longer any doubt that the covid-19 jabs are deadly and incredibly dangerous. It is no exaggeration to describe them as poisons.

Doctors who gave or recommended the covid-19 jabs must be reported to their licensing body (in the UK it is the General Medical Council) and they should lose their licences.

And those doctors should be arrested, tried and imprisoned.

Dr Vernon Coleman’s bestselling book Anyone who tells you vaccines are safe and effective is lying deals with the modern history of vaccines and vaccination. It is available as a paperback and as an eBook.