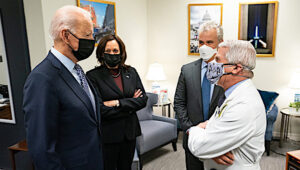 Dr. Francis Boyle, a human rights lawyer and professor of international law at the University of Illinois College of Law, says NATO is using Ukraine to “surround Russia” with biological laboratories and biological weapons to use against them. In an interview with Owen Shroyer on Infowars, Dr. Francis Boyle said the United States government and the Pentagon have put policies in place over several years to preposition biological weapons at Russia’s doorstep. In the interview, Dr. Boyle accuses Dr. Tony Fauci, Francis Collins and CDC director Rochelle Walensky of war crimes.

The Biden administration has denied that these biological activities are taking place at all, and the official US embassy website removed several facts sheets about the construction and funding of the US Department of Defense biolabs across Ukraine. The administration’s ministry of propaganda (the corporate media and Big Tech) now claim that any mention of biolabs in Ukraine is conspiracy theory. However, the Obama-Biden administration spoke openly about biological activities in Ukraine at a previous Nunn-Lugar Cooperative Threat Reduction Symposium. Victoria Nuland, the Under Secretary of State for Political Affairs testified at a US Senate hearing that the biolabs do exist, and she is worried the contents of the lab will fall into the hands of the Russians. The Interim Central Reference Laboratory, a level three bio-safety lab, opened in June 2010 in Odessa, Ukraine.

Russia’s Ambassador to the United Nations brought forth evidence at a UN Security Council, alleging that the US is operating at least thirty different biolabs in Ukraine, which contain enhancements on highly infectious bacteria strains, coronavirus, plague, anthrax and use bats and fleas as vectors of disease spread.

Dr. Boyle did not mince words in the interview, when he labeled Drs. Fauci and Collins “international-transnational Nazi biowarfare death scientists.” “We have an international-transnational cult of Nazi-biowarfare death scientists like Tony Fauci who has been up to his eyeballs in this [since] or Reagan. When I got involved in this around 1983 or 84, Reagan put Fauci in charge of our offensive biological warfare weapons program, and that is how long he has been there,” said Dr. Boyle.

He said that Fauci and Francis Collins (former head of the NIH) “funded the research that led to covid-19, that offensive biological warfare, weapon, with gain-of-function properties.” Dr. Boyle said Collins and Fauci are part of a network of Nazis who operate around the world. “Yes, it’s a cult of these people, including over there in China as well – that Wuhan bat queen. She was trained at the Galveston BSL-4 down there in Texas, which is again, part of the offensive US biological warfare industry. The British are a part of this, the French, the Israelis. So, we have a network and a cult of Nazi biowarfare death scientists.”

Dr. Boyle said these death scientists profit from the lockdowns, coercion, suppression of treatments and from the so-called cures — the forced vaccines and harmful protocol. “We have to resist this Nazi medical tyranny by these death scientists like Fauci, Walensky…we can go through a whole list of these people. They take patents on this technology beforehand, every step of the way, so they can benefit on both sides of the bargain, where they can benefit and make profits off the biological warfare weapon itself and then on the alleged vaccines or therapeutic. So, they got us coming and going and making a killing off of us as they go to the bank.”

If Russia intends to shut these biolabs down, Dr. Boyle said Russian troops “can’t just blow the labs up.” Russian biological warfare experts must secure these sites, because they are extremely dangerous to the world. In the early 1990s, the US military contaminated their own troops with Gulf War sickness after ordering their troops to blow up labs in Iraq. Today, the vilified Russians are in a unique position to hold transnational bio-terrorists accountable.

4 Responses to “Dr. Francis Boyle: NATO and the West have used Ukraine to “surround Russia” with biological weapons”