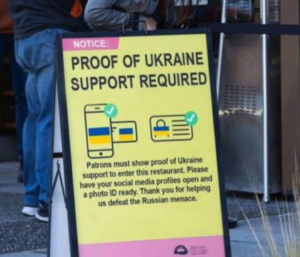 Communism is the religion of the satanist (Cabalist) Jewish central bankers

who control the West through the WEF.All politicians work for them. Communism is
an occult monopoly over literally everything and everyone.

seeks to steal and destroy everything of value, especially your soul.

For example, transgenderism and cancel culture have nothing to do with minority rights.

They’re designed to destroy Christian civilization.Cabalist Jews & Freemasons are first & foremost destroyers.
This is the real reason for antisemitism. The fact it cannot be mentioned illustrates just how far this deadly cancer has progressed. Mankind has been inducted into this satanic cult which requires total conformity.
This short article appeared as a comment here.

by Drew Hunkins
(henrymakow.com)
The frenzied Russophobic groupthink that’s currently reverberating throughout virtually the entire Western militarist-corporate media and citizenry is staggering to witness. One can do nothing but stand back in awe at the indoctrination that’s suffocating us all.

The Russiagate nonsense and Covid Cult hysteria were the worst mob mentalities one had ever witnessed. However neither of those reaches the level of this non-stop animus against Putin and Russia.

Moreover, the cavalier way so many liberals and neo-cons are now dismissing the long-held Mutually Assured Destruction doctrine as it comes to nuclear war is astonishingly dismaying. Glibly advocating for a no-fly zone ultimately means nuclear war.

Chillingly, there no longer appear to be any sane heads left in Washington – personally sanctioning Putin and Lavrov obviously severs diplomatic relations, severed diplomatic relations historically has often been a prelude to war. The U.S. even has national politicians and apoplectic talking heads calling for the assassination of Putin. Brazen criminal violations of international law are now rationally discussed under the aegis of learned gentility on mainstream media. That this taunting could quickly devolve the world into a nuclear war does not seem to bother anyone.

Across the spectrum in the U.S. – from the humanitarian [sic] interventionist liberals to the crazy neo-con warmongers – it’s all Russophobic diatribes all day, all night. Any rational knowledgeable analysts who attempt to present the reasonable Russian position are immediately scorned and ridiculed and dismissed as Kremlin propagandists.

That (Russian Defence Minister) Shoigu is desperately trying to minimize human casualties in Ukraine despite the far-right militias bedding down in hospitals and theaters is ignored.

This extremely dangerous mass psychosis that’s washing over nearly the entire Western hemisphere (except for Latin America) must somehow be transcended before the likelihood that two nuclear armed superpowers clash increases to the point of no return.