We know for sure that with the support of Western countries, the Ukrainian Security Service is preparing a provocation with the use of toxic substances against civilians.

The purpose of the provocation is to accuse Russia of using chemical weapons against the population of Ukraine.

I want to officially state that the units of the Russian Armed Forces involved in the special military operation do not have chemical munitions.

The Russian Federation, unlike the United States, has long fulfilled its international obligations by completely destroying all chemical weapons stockpiles.

To prevent any provocations of Ukrainian nationalists with toxic substances, Russian servicemen in the liberated territory take dangerous objects under control and ensure their safety.

I will add that among the combat documentation captured by us in the 4th brigade of the Ukrainian National Guard, there is a detailed map of the territory of Ukraine with objects and types of toxic substances stored on it. Therefore, any attempt of Ukrainian Security Service provocation with the use of toxic substances will be revealed.

️We have repeatedly mentioned facts about the atrocities of nationalists terrorizing civilians for any disobedience or attempts to leave settlements.

Today, footage of civilians killed in Chernihov, who were supposedly “shot by Russian servicemen,” was circulated on all propaganda resources of the Kiev regime. It was stated that all victims were allegedly queuing for bread.

I would like to stress the absence Russian servicemen in Chernihov.

All units of the Russian Armed Forces are outside Chernihov, blocking roads, and are not conducting any offensive actions on the city.

TAP – I add the Russian flag.  You never see it in the media which is odd with the Ukraine flag being shoved in your face everywhere.  It seems to have St George and the dragon in the middle.

There are at least two sides to this war.  Russians are being killed, wounded and tortured same as Ukrainians.   The Russians are trying to avoid civilian casualties.  The Ukrainian nationalist brigades are killing their own people using a human shield policy.  I’m adding to Sovereigntea’s post which came in as an email or comment. 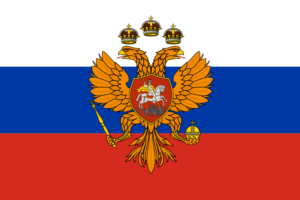