The former Prime Minister, who was the first European leader to travel to the Kremlin when the Russian President took charge in 2000, accused the West of needing to “wake up” on dealing with Moscow. Mr Blair set out his “two-pronged strategy” for how to bring an end to the war in Ukraine, three weeks on from when Putin first invaded.

He said the UK and its allies must “ratchet up maximum pressure and, at the same time, push for negotiation”.

Repeating the tactics that have already been adopted by Mr Johnson and other world leaders, he lectured in a newspaper column: “These should include further economic sanctions — in effect complete exclusion from the international financial community; the fastest possible adjustment to our energy mix to relieve Europe of dependence on Russian gas and oil and a ban or hefty taxes on Russian exports.

“If this requires changes to European and American policy around fossil fuels and the development of nuclear energy, so be it.

“Above all, we need to increase the supply of weapons to Ukraine, particularly its SAM (surface-to-air missile) capacity — and give a commitment that arming Ukraine will be ongoing.”

Tony Blair has outlined his strategy for Ukraine (Image: PA)

Britain, the US and EU have already supplied vast amounts of weapons to Ukraine and have pledged to continue to do so.

Last night a £600million shipment of weapons was sent by the US to help fight off the Red Army’s advances.

Meanwhile, the regularly ramped up sanctions against Moscow has left Russia’s economy teetering on the brink.

“The other prong of our strategy must be a concerted and structured push for a negotiated settlement,” Mr Blair continued in the Daily Mail.

“Europe and America must stand behind Ukraine in a structured negotiation which continues until agreement is reached — or is clearly unreachable.

“Ultimately, Europe and the US will need to think through new security arrangements for its future relationship with Russia. 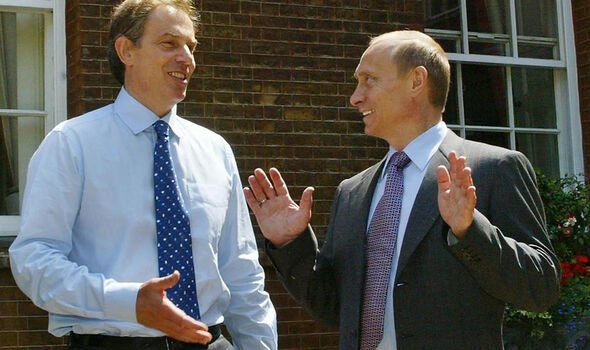 The former PM’s strategy echoed what the West is already doing (Image: PA)

“But this should be part of a much wider recalibration of Western policy.”

Presenting himself as an expert vote on Ukraine, Mr Blair said he has visited the country at least once a year since stepping down as Prime Minister in 2007.

He said his non-governmental Institute for Global Change – which makes millions of pounds a year – had a “long-standing project” there.

Foreign policy has long been an area close to Mr Blair’s heart, taking leading roles on the Iraq and Afghanistan wars while he was in No10.