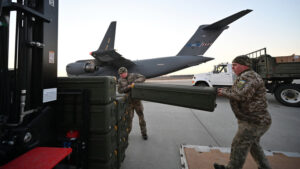 Washington has gone to great lengths to prepare Kiev “to wage a hybrid war against Russia,” a major US news outlet has said
Ukrainian servicemen move US made FIM-92 Stinger missiles to Boryspil Airport in Kyiv. © AFP / Sergei Supinsky

The US has drastically increased its shipments of lethal aid to Ukraine since late last year, including weapons and gear for urban combat, the Washington Post reported on Saturday, after viewing declassified accounting for transfers and sales.

According to the Pentagon’s paperwork, from as early as December Washington had been actively equipping the Kiev government with shotguns, special suits for explosive ordnance disposal and other items useful for combat in urban areas – that’s more than two months before the Russian invasion occurred.

And over the past week the deliveries of American arms to Ukraine intensified further, with Kiev getting Stinger anti-aircraft missile systems for the first time and boosting its arsenal of anti-tank Javelin missiles, among other things.

The list has illustrated the great extent to which the Biden administration “sought to prepare the Ukrainian military to wage a hybrid war against Russia,” the Washington Post added.

The delivery of weapons to Kiev is “a continuous process. We are always, always looking at what Ukraine needs, and we’ve been doing this for years now,” according to an unnamed high-ranking US defense official cited by the paper. MINSK, February 24. /TASS/. Belarusian President Alexander Lukashenko says he has received assurances from Russian President Vladimir Putin the Russian leadership would regard an attack against Belarus as an attack against Russia. A Telegram channel close to the Belarusian presidential press service released a video with Lukashenko’s statement to this effect on Thursday.

“We have a joint group. Part of it is on the western border of Russia. I asked him (the Russian president – TASS) to avoid using part of that group. To keep it in reserve just in case, if something happens. His reply was: ‘I promise you that any attack against or just one step across the border into the Belarusian territory would mean that they attack Russia’,” Lukashenko cited Putin as saying.

“I would like them (in the West – TASS) to hear and understand this. And refrain from lying and coining fakes,” Lukashenko added.

Also, he pointed out that NATO was quickly building up forces on the border with Belarus in Poland and in the Baltic countries.

One Response to “Be careful Nato. The bear has claws.”