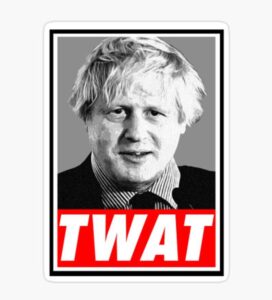 Boris Johnson’s absurd trip to Ukraine was pathetically obvious in its intent. Thatcher invaded the Falkland Islands. Clinton and Bush both arranged politically convenient military manoeuvres. Politicians always start a small war, or talk about one, if they are trying to escape from bad news at home. Putin constantly talks of war.

The purpose of Johnson’s trip was, of course, to try to distract attention the fact that the whole of Britain knows that even by the standards of politicians he is a pretty low individual. A decent leader would have resigned in shame by now.

His advisors, and the men in expensive suits who make the big decisions, know that in the long term the pointless trip to the Ukraine won’t work – but it’ll do as a short term distraction.

Nothing can cover up Johnson’s appalling behaviour, arrogance and contempt for the voters.

The short term aim is to keep Johnson in Number Ten for a little longer – so that all the really bad news (tax rises and so on) can be out in the open before the next election.

If the Tories find a new leader now then he or she will be damaged goods by the time the voters go to the polls again.

It’s much better to use Johnson as a dirt magnet. And to replace him with someone clean and fresh to charm the electorate with false promises so that the Tories can beat off the feeble competition from Labour – possibly the most utterly pointless opposition party in history.

But in the medium to long term, the men in expensive suits who are running this war don’t want popular governments.

Look at what is happening around the world.

It’s pretty well impossible to think of a political leader anywhere in the world who would win a local popularity contest.

And that is the plan.

And then the people of the world will jump at the chance of a World Government run by fresh, friendly faces – bringing promises of peace, harmony and prosperity.

And the people will be so pleased to see the back of Johnson, Biden, Macron, Trudeau, Arden, Morrison, etc., that won’t really notice that they have become slaves within the New World Order.

Vernon Coleman’s book `Superbody’ is subtitled `The Secret of Survival in the 21st Century’. It contains vital information about on how to boost your immune system, spot early warning signs of disease and avoid environmental risks. At the moment it is available as a paperback and an eBook.

One Response to “Why Government Leaders are deliberately being made Unpopular”