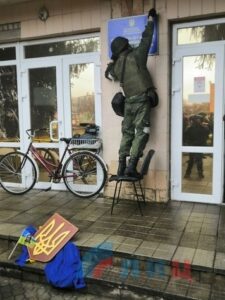 Stanitsa Luganskaya has been liberated from Kiev forces without shots fired.

On February 26, the LPR People’s Militia entered the Stanitsa Luganskaya township on the northern bank of the Severskiy Donets river, that had been under Ukraine’s control since 2014.

Lugansk Media Center editor-in-chief Sergey Meshkovoi arrived in the township early on Saturday, along with People’s Militia service members and other journalists. The military said that they had been informed of Ukrainian withdrawal by locals, who crossed into the LPR in the morning.

“They told us that Ukrainian forces had left,” one of the service members said.

Reporters, accompanied by the troops, are excited to be entering a town they have not been able to visit since the war broke out. Many of the Lugansk residents have been separated from their family members in Stanitsa for years. Civilians were allowed to travel across the river through the checkpoints on both sides, but for some people, such as journalists, service members, officials, it was not an option: Ukrainian security service wanted them, accusing of “separatism”.

Finally, Lugansk and Stanitsa residents are no longer separated by the contact line that follows the natural river border in this area.

“I breathed a sigh of relief, I’m in a great mood,” one of the local women said.

Another one said that she had no idea what is going to happen next, “but it is unlikely to get worse”.

Some drug stores offered water to the newly arrived for free.

Ukrainian flags along the bridge connecting the two banks have been replaced with Republican banners. National symbols of Ukraine have been removed from public buildings in the town centre.

The local administration head Albert Zinchenko, who has been in the office for less than a year, says that the worst happened when the town was taken by nationalistic battalions in 2014.

“They robbed people of everything, took even underwear.”

Then the regular armed forces substituted for them. “It was a bit better,” he says.

Zinchenko is expected to keep the office.

As People’s Militia servicemen advance deeper into the town, more locals greet them, as well as their pets. A grey-and-white cat doesn’t seem to care about politics, but is eager to find out whether the newcomers have some treats.

“You are no longer a kit,” Meshkovoi tells her using a Ukrainian word for cat. “You’re a kot now,” he continues, using a Russian word.

A dog comes by, and an LPR soldier gives him some food.