Joy reigned in my house this past week as one child’s school lifted its mask mandates. At the same time, frustration ensued when another child was uninvited to an event due to her jab status. My little neck of the country can’t seem to decide if it’s going to ditch restrictions or double down. Situational awareness is vital to prepping, and yet it’s hard to tell what’s going on.

Maybe if we look at which governments are taking what kind of measures around the world, we will see trends that can better inform us in the United States.

What mandates do we see in Europe?

Many of the European countries have announced that they will move forward treating Covid as just another endemic disease. Denmark, Norway, Switzerland, and the Czech Republic have all started lifting Covid-related restrictions, such as limits on gatherings and requiring Covid Passes to enter certain venues. Italy, Finland, Ireland, France, and Lithuania are easing many requirements.

Most of these countries plan to be as close to “normal” as possible by March. The United Kingdom has lifted work-from-home requirements, mandatory masking, and requiring Covid Passes to enter venues.

Let’s look at some of these countries a little more closely.

Denmark was the first country in the European Union to scrap restrictions. Denmark never tried to mandate the jab, though 78% of the population voluntarily received it. Their government officials have stated that they do not want to force their population to do anything because they do not want to lose the trust of the people.

Considering that they are letting go of their restrictions, the Danish people’s trust seems well-placed.

On February 3, Sweden also announced that they were ending the use of their Covid Passes. Sweden had been notoriously (or inspiringly, depending on how you look at it) reluctant to shut down when the rest of the world did. How did the Swedes fare? Did they all die for their refusal to place their population on house arrest?

And, like the Danes, the Swedes never mandated jabs, though their country achieved over 70% compliance voluntarily. Interestingly, Sweden has not recommended jabs for children. They simply decided the experimental jabs were not worth the risk to children. Like the Danish government, the Swedish government gives the impression that it is genuinely trying to do what’s best for its citizens.

Meanwhile, the United Kingdom had the second-worst Covid-related death toll in Europe, surpassed only by Russia. Like the United States, the UK has its own influential pharmaceutical giant in its Wellcome Trust. Not surprisingly, the Brits were subjected to much of the same fear-mongering and almost comically overblown death projections we Americans have been.

We’ve got Tony Fauci; they’ve got Neil Ferguson from the Imperial College, whose models in 2020 have been proven wrong by a factor of about ten. And yet, at the end of January, the Brits decided that Omicron had peaked and that they were ready to open up, too.

Are we seeing minor victories with the dropping of mandates?

While watching these European countries back off from becoming techno-fascist dictatorships cheers me up, it’s too soon to declare victory. Other countries seem hell-bent on forcing their citizens into line, regardless of any genuine health concerns.

The Austrians have just signed into law the world’s strictest mandate so far. The government plans to fine people up to $4000 quarterly until they submit to getting jabbed. To enforce this, police officers travel around and randomly stop people to check their papers. People who cannot produce their papers are fined on the spot.

Germany, with a population of about 85 million, is more similar to the United States in its size and diversity. I was born in Berlin and have had numerous friends and relatives living in Germany for years at a time; the cultural differences between Berlin and Munich are comparable to the differences between New York and Houston. And, like the Americans, about half of the Germans are ready to scrap restrictions, and the other half still think it’s too soon. German leaders, such as the Health Minister, Karl Lauterbach, have been proposing mandates similar to Austria’s, but as of February 8, 2022, Germans still cannot come to an agreement.

But, what about Australia?

The Organic Prepper has already posted articles about Australia’s draconian lockdowns. Looking at the rules as of right now, I still can’t help but think of Footloose and the town that banned dancing. Australia has slightly relaxed some of its rules regarding interstate travel, but almost everything requiring public interaction requires proof of the jab.

As I said above, many of the European countries are ditching their contact tracing and Covid Pass requirements; I can’t find any reference to the Australians ditching their surveillance measures.

Because that’s really what these measures are. It’s not about health.

Omicron was mild, and it’s past its peak. South Africa was the first country to detect Omicron. It was named by the World Health Organization on November 26, 2021. And by the end of December, South Africa’s Ministerial Advisory Committee recommended ditching all of their remaining Covid restrictions, such as quarantining and contact tracing.

South Africa had an intense spike in cases with Omicron, but their death rate never skyrocketed. The rest of the world should be looking at South Africa as a bellwether. First to have a spike in cases, first to watch the cases drop off, first to end restrictions. We should all be so reasonable.

However, the American mainstream media does not seem to want to admit we’re done with Covid yet.

What is going on?

There are strange things afoot in the medical world. Death rates have been up. When the head of a life insurance company in Indiana said that claims went up 40% among working-age people, that was big news. There seems to be a wide range of ailments that are suddenly spiking. There’s no one new cause of death for all these young people. It has been clear that the deaths were not from Covid, and insisting on masks and lockdowns (which even Johns Hopkins has admitted didn’t really help anyway) is indefensible at this point.

So, what do we do? We seem to be at a crossroads. The federal government shows no interest in backing down. On the one hand, even blue states such as New York and New Jersey have grown sick of the constantly changing mandates, all of which have proven useless against Omicron. The health care workers I’ve known that wanted everyone jabbed or else barred from civil society six months ago (and I knew a few of those) have become curiously silent. On the other, Biden and his “experts” still ask people to hang on for “just a few more weeks.”

A similar scene plays out in Canada.

Though governors of Alberta, Saskatchewan, and Quebec have all announced ending restrictions, Trudeau, as of February 9, is still trying to convince his public that vaccine mandates are the best way to avoid further restrictions.

Within the European Union, many countries, most notably the small ones with a great deal of trust and social cohesion, are ready to ditch restrictions. The EU itself wants to extend the use of the Covid Passes for another year.   As Omicron peaks across the Continent, their reasons for this year-long extension are nonexistent.

(If you’re looking to keep your family fed in the event of a lockdown, check out our free QUICKSTART Guide on building a food pantry here.)

What has happened to free speech?

Most tellingly, on February 8, 2022, the United States Department of Homeland Security issued a bulletin that equates questioning the Covid narrative with domestic terrorism. No adult capable of critical thinking can possibly think any of these government actions have anything to do with public health anymore. The more time goes by, the more all the events of the last two years point to the United States government, the Canadian government, and the EU attempting to implement surveillance states.

So, worldwide, we have governments getting more oppressive and populations getting less compliant by the day. This sort of tension has never ended well. If people start getting hungry, which may very well happen with all the supply chain issues, we may begin to see something like the French Revolution start to play out.

The thought that that might happen on American soil turns my stomach, but lots of stomach-turning things have happened throughout history, and we are no different from people living during the times of the Civil War, the French Revolution, or the Bolshevik Revolution. Anything is possible.

People are fed up with these mandates.

And yet it’s not inevitable, either. Peaceful noncompliance may very well force Trudeau’s hand in the end. If you want to be a dictator, you need people willing to enforce your arbitrary rules, and he may not be able to find enough of them. The same goes for the US.

The Canadian trucker rally continues to inspire. Within the next two weeks, truckers around the world from Norway to New Zealand are planning similar protests. This may be the last chance for freedom-lovers to make ourselves heard. I’ve seen signs from protests that say, “Farmers Grow It, Truckers Haul It.” The protestors know that, without them, things fall apart.

Most of us cannot change policies or influence politicians…

But the little choices we make everyday matter. Do we report heterodox-thinking friends, family, and coworkers the way DHS wants us to? Or do we support each other? Do we “just go with the flow,” or do we continue to speak out about infringements on our rights to life, liberty, and the pursuit of happiness? Do we spend our time zoning out in front of a screen or learning skills that will help us become assets to our communities?

I see no easy way out of the mess we’re in. Either we slide along into what the Davos crowd wants, where we “own nothing and are happy,” or we brace ourselves for shortages as protests continue. Free societies have not been the norm throughout history. The norm, since the time of the ancient Sumerians, has been strongman leaders. The norm is trying really, really hard to reassert itself, and we need to resist it if we want to retain our rights and freedoms. We need to be able to keep our spirits up in the face of shortages, frustrations, and inconveniences. I firmly believe that if we freedom-lovers continue to support each other and keep our communities strong, we may avert sliding into medical-technical tyranny. The time to consciously choose a side is now.

Joanna has been homeschooling three children since 2012. In 2014, she moved to the High Plains of Colorado. She and her children began a little homestead, gardening and raising chickens for eggs and meat. One animal led to another, and these days they have livestock guardian dogs, chickens, geese, ducks, alpacas, goats, pigs, and one very spoiled cat.

Featured image is from The Organic Prepper 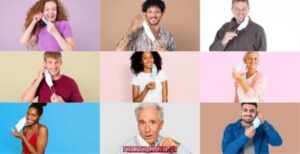 2 Responses to “The little choices we make everyday matter”