Never in my life did I think I would ever see people buy into the kind of nonsense we’ve seen in the last two years, and one reason for this irrationality is, I believe, because health authorities, political leaders and the media all lied about facts, data and science. By crafting an irrational narrative and pushing it to the exclusion of everything else, they brainwashed people into relinquishing all sense and sensibility.

For example, by the end of November 2020, retirement communities were setting up “hugging walls” where visitors could hug their loved ones through thick sheets of plastic. The AARP reported21 this as an ingenious invention to help loved ones connect, but in reality, it’s but one step from madness. Did no one think that an airborne virus might travel over or under the plastic curtain?

And don’t even get me started on the single-directional walking rules that stores imposed, where large arrows on the floor directed people to walk in a single direction down aisles. Fortunately, that was apparently so over-the-top idiotic that it didn’t last very long.

Unfortunately, the same cannot be said for all those plastic barriers erected on desks and checkout counters. Untold amounts of money have been spent on these useless contraptions that diminish human interactions far more efficiently than they block viruses.

It took well over a year and a half before media even started questioning the usefulness of these soul-sucking barriers. In an August 19, 2021, New York Times article,22 Tara Parker-Pope highlighted research suggesting the barriers “can interfere with normal ventilation” and airflow,23 which can make viral spread more likely. One study — by the CDC, no less — found the barriers had no impact on the risk of infection,24 and another found they worsened it.25

“Under normal conditions in stores, classrooms and offices, exhaled breath particles disperse, carried by air currents and, depending on the ventilation system, are replaced by fresh air roughly every 15 to 30 minutes,” Parker-Pope wrote.

“But erecting plastic barriers can change air flow in a room, disrupt normal ventilation and create ‘dead zones,’ where viral aerosol particles can build up and become highly concentrated.

‘If you have a forest of barriers in a classroom, it’s going to interfere with proper ventilation of that room,’ said Linsey Marr, professor of civil and environmental engineering at Virginia Tech and one of the world’s leading experts on viral transmission. ‘Everybody’s aerosols are going to be trapped and stuck there and building up, and they will end up spreading beyond your own desk.’”

One of the most persistent irrational beliefs spawned during this pandemic is that masks prevent the spread of the virus. Before 2020, you’d have been hard-pressed to find a health care professional who thought a surgical face mask could block an airborne virus. Well, I don’t need to tell you what happened. You’ve all lived through it.

In addition to the many studies that in years’ past demonstrated that masks don’t work against viruses, we can now point to a U.K. Department of Education report,26,27 which found no evidence that universal mask wearing in schools reduced absences due to illness. Sarah Lewis, professor of molecular epidemiology at the University of Bristol told Bloomberg:28

“Mask mandates can detract from the quality of education and exclude pupils with hearing difficulties from discussions. Where there is insufficient evidence of a benefit of a policy and evidence of harms the default should be not to intervene.”

Even so, researchers who apparently want masks to be the rule rather than the exception continue to pursue “studies” that purportedly prove everyone is better off with their face covered. For example, a study supporting mask usage29 came out in January 2022 as part of a National Science Foundation initiative to study disease transmission in classrooms. The study consisted of just 14 people.

The insanity of the mask is perhaps best illustrated by school marching bands being forced to wear masks with a giant hole at the mouth, through which they can play their wind instruments.

The only good thing about this sad story is that sale of these useless facial feature blockers — reportedly picked up by universities and high schools across the U.S. — had by the end of August 2020 raised $12,000 for the New Mexico State University’s music scholarship fund.30 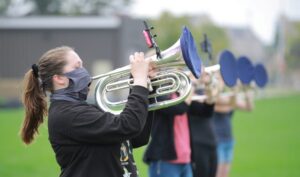