This page posted Feb 17 2022 and has posts for at least the previous week. For the latest page, click home.

The nuclear blast post on this page (still on top though) has been condensed, for the original post Click here. For today’s stuff scroll down, this will be on top for a while.

NUCLEAR WAR IS ON.

The mystery is solved. Solved because the voice in the video says “wierd” in Arabic. This is Israel nuking an Arab country, probably Syria, which Israel managed to keep secret via total ownership of the world’s media and Western governments. The censor bots are working overtime which is probably why you have not seen this elsewhere by now The image is showing the mushroom cloud from the first nuke being lit up by the second nuke. Syria had very heavy snowfall this year which is why this looks like Ukraine.

The video is so “sensitive” that some ISP’s are censoring it and all platforms I know of are. If the video farther down the page will not play, the video is also linked to this image. Right click this image and “save link as” or “target as” or “video as” whatever your system says it is and then play it off your desktop.

Look at the clouds. This is a huge event, off in the distance, twice as tall as the clouds.

SCROLL DOWN TO THE ACTUAL VIDEO, WHICH IS MORE CLEAR THAN THIS CAPTURE.

The video I have on this site is now censored at it’s original source. It did not take long. All videos out there now are re-posts of what I grabbed. THE VIDEO IS SUPER HIGH QUALITY. NOT BLURRY UFO FOOTAGE, THERE IS ABSOLUTELY NO QUESTION ABOUT WHAT THIS IS. SCROLL DOWN.

NUCLEAR WAR: SOMETHING HUGE IS HAPPENING

Trolls are saying this is fake, but it is NOT FAKE.

NUCLEAR WAR, BUT THE SCAMMING MSM IS MUM AS TO WHERE. THIS IS GOING TO BE SHUT UP.

I have confirmed the video below works in Windows and Linux, but one of the ISP’s is blocking it. If it is just a blank screen below, click here. IF IT STILL DOES NOT PLAY, RIGHT CLICK THE LINK OR PICTURE AND “SAVE VIDEO AS” AND IT WILL DEFINITELY WORK. 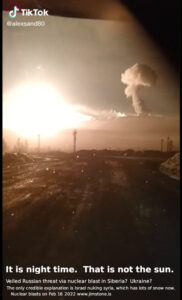