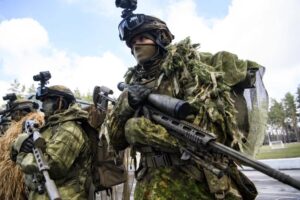 All War; Hot Cold, Geopolitical, International or Domestic, Is Always War Against All of Us

“War is peace.
Freedom is slavery.
Ignorance is strength.”

Due to the recent (and not so recent) bombastic geopolitical idiocy by the U.S. pundits concerning Ukraine, there has been much talk about the possibility of World War III. These statements are meant to strike fear in the populace, and propagandize the idea that a single enemy exists, that ‘real’ global war is likely, and that ‘world war’ is meant to bring an end to tyranny. This notion is confusing at best, but everything reported about war by governments, mainstream media, much alternative media, and by the ignorant public at large, is little more than lies and deceit. The common thinking about war is literally absurd, as war has been continually waged throughout the entirety of our existence. As far as humanity is concerned, war is and has always been, perpetual. With that said, all war is not against a single or even multiple ‘enemies,’ but is against all of us. When governments exist, constant war is inevitable.

War takes on many forms; most of which are not openly discussed by the claimed ‘news outlets.’ Although the U.S. always claims moral superiority, history would dictate that the U.S. for example, has been involved in or prosecuting aggressive war for approximately 93% of its existence, but alas, it is most assuredly closer to 100%. Just because troops are not known to be harassing, tormenting, maiming, raping, and killing innocent people here or in faraway lands, does not mean that war, war plans, and psychological war are not always active in one manner or another. U.S. aggression is monumental, and surpasses all other nations on earth, now and in the past, and U.S. policy that is total aggression against its own population is never ending. The ‘covid’ hoax is just the latest example.

We are now witnessing the result of the long-planned, long-desired, and geopolitically-driven U.S. aggression concerning the Ukraine situation and Russia. It would behoove all to disregard most every report about this situation coming from the White House, the political pundits, the mainstream media, and some of the alternative media as well. The build-up of this coup, the aggression by the U.S. in that region for many years, the multi-billion dollar funding by the U.S. for support and weapons in Ukraine, and the election manipulation evident there and elsewhere by the U.S. this century, should be enough to bring light to the fact that this is no recent Russia/Ukraine debacle, but one that has deep roots tied to the U.S. and NATO. These statements should in no way be taken as showing any support whatsoever for the evil Putin, the Ukraine government, or any abhorrent political or governing system involved in this staged and pre-planned response by the world players. After all, it is always the people that lose; it is always the people who are considered the enemy of the state.

As reported, “Washington’s regime-change arm, the National Endowment for Democracy (NED), has spent $22.4 million on operations inside the country since 2014, when democratically-elected President Viktor Yanukovych was overthrown and replaced by a successor government handpicked by the U.S. Those operations included propping up and training pro-Western political parties, funding pliant media organizations, and subsidizing massive privatization drives that benefit foreign multinational corporations, all in an effort to secure U.S. control over the country that NED President Carl Gershman called “the biggest prize” in Europe.”

But this was only the tip of the funding iceberg, as the U.S. spent many billions of dollars supporting ongoing protests, and the Ukrainian ‘opposition’ during the overthrow of the elected Ukrainian government in 2014. This was stated openly by then Assistant secretary of State, Victoria Nuland. That was 8 years ago, so this is not some recent, organic, or in any way new posturing by Russia. U.S. interference in the region has been long-lived, and for at least the past 18 years. This in no way justifies Putin’s moves, but it does help to understand history. If one simply looked at recent headlines by U.S. ‘news’ sources, a different picture is being painted. “Putin Nuke Warning?” “Countdown WWIII,” “All Out Attack,” “Fuhrer 2022,” are all meant to stoke great hatred and fear in the American population. Could this be happening because the bogus’ Covid’ narrative is breaking down, and more fear-mongering is necessary in order to retain control of the masses?

As James Corbett and James Evan Pilato recently pointed out, this is not about the Ukraine or its people, it is about Germany, and their efforts to solidify trade relationships and the completion of the Nord Stream 2 Pipeline. Germany is already getting about half its natural gas from Russia, and the U.S. does not want Germany and Europe to have any increase in trade with their neighbor, as it is seen by the warmongers in Washington as a threat of commerce and peace between European allies and Russia; peace being the last thing desired by the U.S.

The first order of business was to shut down the progress being made, and the certification process between Germany and Russia concerning the pipeline, so that no new energy deal could go forward. This is exactly what the U.S. desired, as stated by the evil Biden, of course as told to him by his handlers. This can only cause much more tension between Russia and the U.S., just as is being sought. The more fear and uncertainty, the easier it is to control large populations.

None of this is accidental, it is always pre-planned, and plots are continually warming on the back burner in case more chaos and conflict are necessary in order to retain ‘emergency’ powers over the people. If one state coup falters or fails, another is waiting in the background, and so the game continues. It is imperative for the state to keep the people at bay so as to retain power and control, and what better way than fake ‘disease’ and war threats to do so?

Once enough fear is evident and widespread, the real controlling system can be implemented. That strategy is the complete takeover of the monetary system, the elimination of cash and privacy, and the digitizing of all money systems. Every central bank around the world is either studying, planning, or has already put into place, new digital currencies controlled at the national level and fully centralized. This could easily be the final nail in the coffin of freedom if allowed to go forward. It is the backbone of total societal control through a technocratic system run by the very few. It would allow for all transactions to be monitored and regulated from above, it would allow for any non-compliant persons to be shut out of the system at will, it would set the stage for universal social credit and passport mandates, and it would allow the central power structure to control virtually everything.

Nothing spoken about here is singular in nature; it is all connected. In fact, everything that is happening today from the ‘Covid pandemic’ fraud, to the threat of world war, to the individual conflicts disguised as unique threats, to the massive inflation, and to the widespread bio-weapon injections sought by the state, is all part of the plan to take over the planet and form a globalized world governing system.

This is only touching on the edges, as much more has happened, and much more terror is to come in the future. This is not over, regardless of any news to the contrary or brief allowance of freedom’ permitted by the state actors, in order to quell the angst and depression of this weak and gullible society.

Without mass dissent soon by large numbers of individuals, and a defeat of unfounded fears, we all face hell on earth. Once the control measures are fully in place, it will be almost impossible to reverse the totalitarian takeover that is now underway, and all of us fighting back will be hunted as criminals and terrorists. Who will protect you then; and who will you rely on to save you? Once you turn to governments and rulers for your sustenance and safety, once you have no control over basic services and needs, once you have no way to support yourselves, and once your family is taken from you; you will have nothing left but your slavery.

We are surrounded by war, and war is everywhere, every day. It is not limited to outside aggression, it is all-consuming, and from within. Every government is bound to practice war against its own, long before it considers war with others. In essence, war is never-ending, and all war is against the people; all the people, all the time.

“The truth is, one who seeks to achieve freedom by petitioning those in power to give it to him has already failed, regardless of the response.
To beg for the blessing of “authority” is to accept that the choice is the master’s alone to make, which means that the person is already, by definition, a slave.”

Foreign intervention and the Ukraine crisis

The Best of Gary D. Barnett

Gary D. Barnett [send him mail] is a retired investment professional that has been writing about freedom and liberty matters, politics, and history for two decades. He is against all war and aggression, and against the state. He recently finished a collaboration with former U.S. Congresswoman, Cynthia McKinney, and was a contributor to her new book, “When China Sneezes” From the Coronavirus Lockdown to the Global Political-Economic Crisis.” Currently, he lives in Montana with his wife and son. Visit his website.