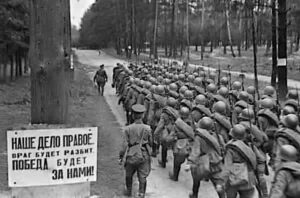 Recruits leaving for the front during mobilization, Moscow, June 23, 1941.

Scott Ritter is one of the most highly respected commentators on American imperialism. Having been weapons inspector in Iraq and advising that there were no weapons of mass destruction prior to the Bush/Blair invasion, that resulted in millions dead and displaced. This highly informed opinion piece should be immediate reading for every concerned citizen in Europe and America. The stakes are much higher than anyone suspects.