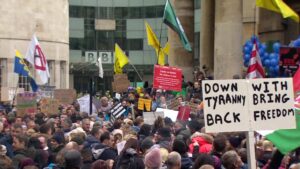 The NHS vaccine mandate should be cancelled to prevent staff shortages, the Royal College of GPs has said, as thousands took to the streets across England to protest against the policy. The BBC has more.

NHS staff must have a first jab by February 3rd and be fully vaccinated by April 1st to continue in frontline roles.

The Department of Health said there were no plans to delay and it was “the right thing to do to protect patients”.

NHS workers who oppose the Government’s mandatory vaccination policy have staged a protest in central London.

Demonstrations were also held in other cities across England including Manchester, Birmingham and Leeds. …

Martin Marshall, Chairman of the Royal College of GPs, said compulsory vaccination for health professionals in England was “not the right way forward”.

He said the vast majority of staff were vaccinated but some 70,000 to 80,000 were not and they accounted for 10% of staff at some hospital or GP surgeries.

Some 94.3% of NHS trust health care workers in England have had a first dose of vaccine and 91.5% have had a second dose, figures to December 31st show.

If unvaccinated staff were taken out of frontline roles by April 1st there would be “massive consequences” for the NHS, he told BBC Radio 4’s Today programme.

He said a delay would allow time for booster jabs and a “sensible conversation” about whether vaccines should be mandatory at all.

Danny Mortimer, deputy chief executive of the NHS Confederation, said some frontline staff would have to leave their roles if they choose not to be vaccinated.

He said: “This will reduce frontline NHS staff numbers even further and lead to more gaps in capacity at a time of intense pressure and patient demand.”

In London, demonstrators marched from Regents Park to the BBC headquarters in Portland Place in a peaceful protest against mandating vaccines for health workers.

But Dr. Nikki Kanani, medical director of primary care for NHS England, said health care professionals had “a duty” to make sure they were protected.

Meanwhile, Kate, a nurse in Hampshire, told the Today programme she was prepared to lose her job rather than have a coronavirus vaccine against her will.

“I don’t feel like the vaccination needs to be mandated because we are medical professionals and we have enough information to make that decision for ourselves,” she said.

“When I had Covid I was ill but not particularly unwell and when it comes to me being forced to do something or lose my job, I just can’t understand how they think that’s a sensible position. I’m good at my job, I care about people, and I certainly have never and would never put people at risk.”

Pressure growing on the Government to U-turn on this, which can’t come too soon. With the evidence that Omicron both evades the vaccines and is mild, what justification there might have been has now clearly evaporated. Perhaps the Government is leaving the U-turn to the last moment in order to maximise the pressure on unvaccinated staff to accept the jab. Which is of course cruel, but then so is the policy so we can hardly expect them to care about that.

Stop Press: talkRADIO has tweeted about the protests taking place today in London and across the country: “Thousands of people have gathered in central London to protest against the mandatory vaccine mandate that could see more than 70,000 NHS workers lose their jobs.“