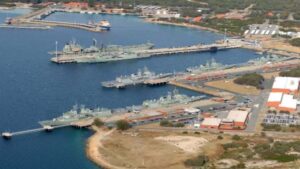 Pfizer has taken control of HMAS Stirling Naval Base in Western Australia, after EZFKA Prime Minister Scott Morrison failed to meet vaccination targets for the third month in a row.

Pfizer stated that the deal, signed under the terms of the Trans Pacific Partnership, allowed the pharmaceutical corporation to claim the military base similar to deals signed around the world, including with many South American nations.

“It’s specifically stated in the contract that Morrison signed with us that he put up Garden Island and Kapooka as two assets we can seize as collateral,” Pfizer CEO Albert Bourla said.

“We wanted the Port of Darwin but that’s already been taken.”

PLAN ships are due to arrive in Rockingham next week to complete the seizure.