in other news, it turns out the disaster here in the Sierras, with many people losing power for days, including me, wasn’t just a natural disaster, caused by snow. It was caused by vaccine mandates. I had thought they didn’t have enough snowplows around here, but as it turns out, they do. The problem is, Governor Newsom had mandated vaccines for government workers, including snowplow operators, and many just decided to quit or not show up. So none of the highways were plowed or cleared of fallen branches, as they normally would be, causing a major crisis where people died. As I reported, ambulances weren’t able to get through, though we don’t yet have a death count. As with Kazakhstan, local news in California is trying to explain the crisis as due to the long drought earlier this year, not mentioning all the snowplowers who didn’t show up to work because they weren’t vaccinated. Around 300,000 lost power, and many are still without power on day ten. I would assume most in the Sierra foothills have generators or wood stoves, since power outages are weekly occurrences, but atrisk people always die in these events. A handful of deaths have been reported, but since the event is ongoing, there is no total.

If they ever do report the truth, they will report it as the fault of our red counties, who are resisting the vaccine mandate. Though we are just to the east of Sacramento, where these fake laws arise, our counties are among the reddest and most resistant to the mandates in the State. We are just trying to avoid being killed by killer vaccines, but as the unvaxxed we will be blamed for any deaths due to noncompliance. Eventually it will be proved we are right, since we will be the only one that survive this unscathed, but that may take several more years to play out. Given what I know of my own county and state, I would guess the same thing is going in Virginia and other east-coast states facing similar tragedies, including all the vehicles stranded on major highways. 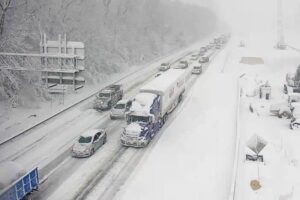 Vehicles are seen on an icy stretch of Interstate 95 closed as a storm blankets the U.S. region in snow, near Fredericksburg, Virginia, U.S. January 3, 2022. Virginia Department of Transportation/Handout via REUTERS

Mainstream media is blaming incoming governor Glenn Youngkin in Virginia, which is rich since he hasn’t even taken office. Ralph Northam is still governor and is the one heading the relief effort there. He is also the one responsible for the vaccine mandate. State employees in Virginia have required vaccination since September 1, and most counties have followed suit, so I would assume that stretch of highway between DC and Richmond had snowplowers who didn’t show up, either quitting or taking sick leave on purpose. In fact, I have had confirmation of that now via email, since I get reports from all over the world. East-coast truckers are telling me things are a “goat-fuck” there now, some of it due to weather but most of it caused by vaccine mandates, firings, and people quitting their jobs in protest. He also tells me this, which I will pass on to you for your amusement: he is paying his kids a quarter for every dirty truck they write my web-address on. That’s how its done, folks.

In the meantime, I can tell you that those of us pushing back on mandates are beginning to win. Many states are being forced to rehire nurses and government employees fired for vaccine non-compliance, and to ignore federal or state mandates to do it. More and more courts are ruling against mask and vaccine mandates, and the judges are getting more and more vocal against what even they are admitting is tyranny. See the recent ruling in the Navy Seals case, where a federal judge said that “the Constitution has no Covid exception, and that there is no military exclusion to the Constitution.” He added that the executive branches, federal and state, and its health and regulatory agencies, including OSHA, have no authority to make laws or mandates, that power being expressly given to legislatures. Something I have been screaming for two years.

The Supreme Court has finally agreed to hear arguments in a case like this, so it may make a ruling soon. I almost hate to mention it, since there is no guarantee the Supreme Court with make a Constitutional ruling here. We have already seen proof they are owned by Prizer like everyone else at the top, so confidence is low in that regard.

One Response to “Natural disasters? No. vaccine mandate disasters.”