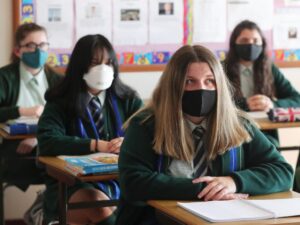 A teacher forwarded this letter he wrote after he read about the decision to make masks compulsory in lessons for all children in English secondary schools. He sent it to the Chairman of his local Conservative Party Association. I’m sure he speaks for many Conservative members this morning.

If you could forward this to the relevant person, I would be very grateful.

I have always voted Conservative and I have also previously donated but I will never do either again.

This reintroduction of masks in classrooms is the last straw. I simply can’t see any future in which this doesn’t become an annual event, if you believe current conditions require it. As a teacher, I find this intolerable. Our pupils often leave home a little after 7 in the morning to travel by bus and return after 5pm. The winter weather does not often make it desirable to go outside. They will therefore have to wear these things for ten hours at a time, almost continuously. Three of the pupils I teach are partially deaf and they lip read. Their experience for the next few weeks will be awful, as they are denied normal interactions with their friends. More Generally, the effect on morale is draining. We are preparing them for their third winter in what seems deliberately orchestrated to feel like a state of emergency. Pupils who had barely left primary school when all this began are now preparing for GCSEs and this has been their experience for a large proportion of their lives. How are we supposed to motivate them to prepare for exams that they know may not happen? How can we ask them to look forward to a university experience that will most likely turn into a dull and expensive series of online videos? What sort of career can they look forward to if their qualifications may be assigned on the whim of their teachers and lack any credibility? Even the small pleasures and the things that make schools feel like communities are being taken away: discos, film nights, assemblies, carol concerts, expeditions. You won’t even let them see one another smiling. You have turned schools into hygienic factories and prolonged the emergency measures to a point where this feels permanent.

At what point do we accept that this is an endemic disease and that we need to move on from bizarre, largely symbolic, practices that seem disproportionately targeted at those in least danger? When do we acknowledge that we are as safe from this as we can ever be and it is not reasonable to ask people to exist like this?

At no point in my life have the actions of a government so directly affected my life, and in such a negative way. I would never have believed it would be a Conservative Government.

I will not be enforcing any of this in my lessons. Nor can I ever again justify supporting or voting for a candidate representing a party that would allow this to happen. I would appreciate it if you would remove me from your mailing list.