How Governments & the UN are Implementing It

y name is Shoshi Herscu, and I’m a 47-year- old independent journalist from Haifa, Israel.
I first became aware of a deadly depopulation and control agenda for humanity a few years

ago after finding information about chemtrails, smart me- ters, and the orchestrated emigration from Africa to Israel, and from the Mideast to Western countries.

For a long time, I had no idea there was any connec- tion between these diverse topics.
I was overwhelmed even learning
about each of them separately.
The most difficult experience dur-
ing this time was feeling so alone.
No one in my surroundings would 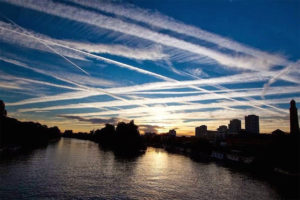 listen to me – definitely not my
family or friends. When I men-
tioned to my best friends about the
phenomenon of ‘chemtrails’, I was
ridiculed. However, over time they
realised what was happening, and
one day I even overheard a friend
explaining to someone else about
chemtrails. I felt that this phenom-
enon was so crazy, and it made me sad and depressed. I didn’t share much about these topics at the beginning. I couldn’t. I first had to absorb this information and make sense of it. Everything in my reality looked upside down; from that time on, I began to interpret my reality through these filters.

After a few months, I began writing about these top- ics for an Israeli alternative news site and on my blog. I received feedback from many people in Israel – negative, positive, and interested inquiries too. As there was no information about these topics in Hebrew, people were eager to become informed on the subjects. Then, some- how, I found people who had been researching these topics, and we discussed them, connected the dots, and shared information and our emotional outrage so that we all felt less isolated in general. It was interesting that more people came forward who felt the same as I do – whether in Israel or other countries – on Facebook or in real life,

even on the train, at the supermarket or out on the town. In Israel, it’s very common for people to strike spontane- ous conversations everywhere, so it made discussing these topics a little easier.

Let me start by presenting a little background on this depopulation agenda.

THE POPULATION EXPLOSION OVER THE LAST 200 YEARS

The world’s human population has exploded over the last two hundred years. According

to United Nations (UN) estimates, we numbered less than one billion people 200 years ago, while today there over seven billion humans living on Earth! This is a stag- gering fact considering that for thousands of years the population of the world increased very slowly. However, in the last century, the world population grew exponen- tially from 1.5 to 6.1 billion between 1900 and 2000! Despite these steady increases, recent studies

reveal this pattern has changed and population growth is now declining ‘naturally’. It decreased from a peak of 2.1 percent per year in 1962 to almost 1.05 percent in 2017.

In the last half-century, the population growth rate has declined steadily, and UN projections indicate this seem- ingly natural decline will continue in the next decades, with estimated projections at 0.1% annual rate of growth by 2100. Today some countries in the world exhibit a slightly negative natural population growth: the death rate exceeds the annual birth rate. According to research,

this is a new phenomenon. There were no countries
with negative natural population growth until the 1970s. Furthermore, UN projections show this decline in growth rate is evident worldwide across all countries and regions, despite the differences between “developed countries” and “less developed countries.” . Continues

4 Responses to “THE PLAN TO DEPOPULATE 95% OF THE WORLD. From Alan via Gordon, thanks guys.”