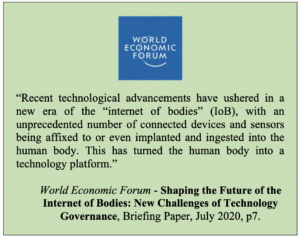 As the World Economic Forum revealed in June, 2020, the ‘Internet of things’ is really a stepping stone to what they are now calling The Internet of Bodies.

“We’re entering the era of the Internet of Bodies: collecting our physical data via a range of devices that can be implanted, swallowed or worn.”

Evidence that the Covid Vaccines Implant Bluetooth Biosensors
by Jeremy James
(Excerpt by henrymakow.com)
The Bluetooth factor may …offer additional evidence – in the form of letters and numbers – that the so-called vaccines contain clandestine ingredients and that these ingredients, which are being dispersed via an intensely coercive international inoculation program, are tied to a much wider agenda and have nothing at all to do with health.
Bluetooth is the name given to a band of electromagnetic frequencies which, in coded form, are used to label every cyber-connectable device with a unique identifier. The 48 byte address can uniquely identify millions, if not billions of devices. In conjunction with WiFi, it forms a backbone to the ‘Internet of things.’
However, as the World Economic Forum revealed in June, 2020, the ‘Internet of things’ is really a stepping stone to what they are now calling The Internet of Bodies. Here is how the WEF put it: “We’re entering the era of the Internet of Bodies: collecting our physical data via a range of devices that can be implanted, swallowed or worn.”

The word to note is “implanted.” Since eight billion people are unlikely to step forward and ask to be “implanted” with a tracking device, the Elite intend to implant it by covert means. The strongest candidate for this is a nanosize biosensor injected via the so- called Covid vaccines
If they are now talking about the Internet of Bodies, it is because they are more than half way there already. If challenged, they will argue that it is only intended to collect health data and protect the general population.
In reality it will be used to track anyone implanted with a nanosensor, compile a complete record of their movements and, via additional analysis, determine the persons they associate with.
HOW THE BLUETOOTH SYSTEM WORKS
A Bluetooth device, such as a smartphone, emits (on request) a signal which other Bluetooth devices in the vicinity can detect. When they detect the signal they emit a signal of their own, giving their Bluetooth address.
The smartphone receives this and registers the address on the smartphone screen. As yet smartphone users are unable to do much with this information since they cannot connect with and operate most of these other devices.
When news of Bluetooth tracking of humans (and not just “things”) began to circulate on the Internet earlier this year, it was speculated that the Covid vaccines were being used to implant nanosensors in recipients without their knowledge.
An enterprising individual in Russia posted a video on YouTube which showed how he was able to access via the ‘dark web’ a real-time database containing the personal records of hundreds of thousands of Russian citizens. The records included their vaccination status, current location, date of birth, and much else besides. Since virtually every record contained a positive entry for ‘vaccination status’ he concluded that the vaccines had been used to implant the biosensors.
A number of videos have been posted on the Internet showing a long list of Bluetooth addresses detected by a smartphone. The total in each case greatly exceeded the number of people in the vicinity, leading those who uploaded the videos to conclude that the addresses were emitted, not just by smartphones in the vicinity, but by the owners of the smartphones. —
Continues
Related – More Evidence Covid Vaccines Contain a Barcode
https://www.laquintacolumna.info/en/news/what-is-the-real-cause-of-covid-19/
Dr Luis Benito regarding Mac codes being emitted.
Interesting material for quick reference
https://t.me/videosdrjoseluissevillano_1981mx/3846
There are many scientific articles published about this phenomenon. Here are some examples.
https://www.researchgate.net/publication/309286984_HEH-BMAC_Hybrid_Polling_MAC_Protocol_for_Wireless_Body_Area_Networks_Operated_by_Human_Energy_Harvesting
https://www.researchgate.net/publication/283302295_CORONA_A_Coordinate_and_Routing_system_for_Nanonetworks
https://www.henrymakow.com/2021/12/evidence-covid-vaccines-barcode.html?_ga=2.208653074.1006389435.1638658226-346964864.1627224119