With each passing day, the list of people suffering tragic consequences from the novel gene therapies marketed as COVID “vaccines” gets longer. Slews of professional and amateur athletes have collapsed and died in recent weeks, and mainstream media act as if those things are either normal or inexplicable.

They’re neither. They’re abnormal, and totally explainable when you know how the COVID shot destroys your heart and clumps your blood. Among the latest victims is Florian Dagoury, world record holder in static breath-hold freediving. Before his Pfizer jabs, he was able to hold his breath for 10 minutes and 30 seconds.

After his second dose, his diving performance was slashed by about 30%, and he’s been diagnosed with myocarditis, pericarditis and trivial mitral regurgitation, a condition in which the mitral valve in the heart gets leaky, allowing blood to flow backward into the left ventricle.

“After my 2nd dose I noticed that my heart rate was way higher than normal and my breath hold capacities went down significantly. During sleep, I’m at 65-70bpm instead of 37-45bpm. During the day, I’m now always over 100bpm instead of 65bpm, even when I sit down and relax. Once I even reach[ed] 177bpm while having dinner with friends!

Which is basically an inflammation of the heart muscles cause by the immune system and some tiny leaks of blood from the valves that no longer close properly. I’m now struggling to reach 8 min breath hold, 150m dyn[amic apnea freediving] and I even have a strong urge to breath[e] doing 40m dives. 30% decrease on my diving performance roughly.”

Many Athletes Are Losing Their Careers

Other professional athletes whose careers are now on hold include French tennis player Jeremy Chardy, who commented on his situation:3

“Since I had my vaccine … I am struggling. I can’t train. I can’t play … It’s frustrating, especially that I don’t have 10 years left to play. I regret having the vaccine, but I could not have known that this would happen … it’s difficult because I was having fun and I want to play longer.”

Another one is Antoine Mechin, a 32-year-old triathlete whose career is on indefinite hold, as he developed pulmonary embolism after taking his second dose of Moderna. What makes it all the more tragic is that Mechin suffered pain and shortness of breath after the first shot, but he was told his symptoms were probably just stress and fatigue. He went ahead with the second, and now has severe lung damage. Mechin said:

“Damaging healthy people to preserve the health of the weakest, a choice of backward logic. I would not get vaccinated again if it had to be done again.”

Largest Safety Signal in the History of Medicine

By any objective measure, the COVID shots are the most dangerous drugs ever launched. The safety signal is absolutely massive. Here’s a screenshot summary from OpenVAERS’ November 19, 2021, report (the latest available at the time of this article),4 listing some of the most common effects reported following the COVID jab.

According to calculations by Steve Kirsch, executive director of the COVID-19 Early Treatment Fund, adverse events are conservatively underreported by a factor of 41,5 so it’s possible we need to multiply these numbers by 41 to get closer to the real-world impact.

For a visual illustration of how dangerous the COVID shots are in comparison to all other vaccines on the market, just look at this OpenVAERS graph. It speaks for itself. 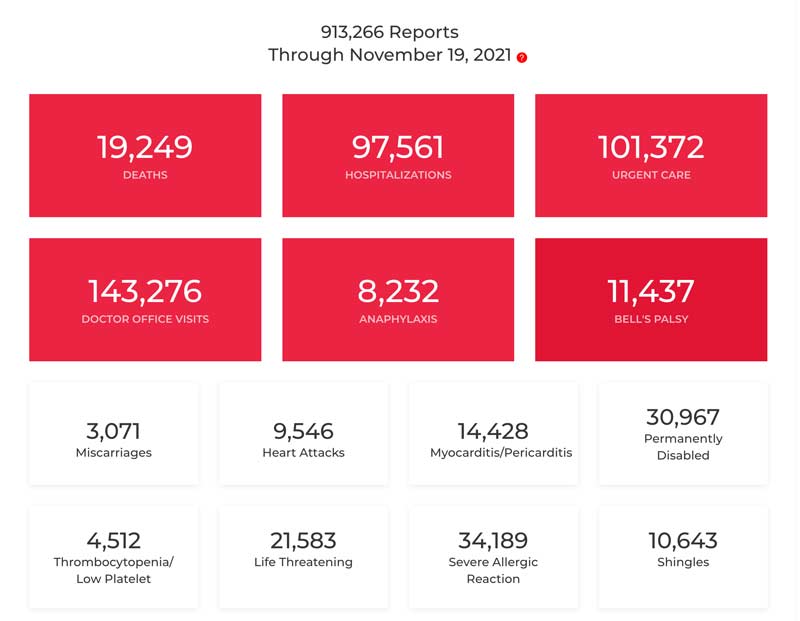 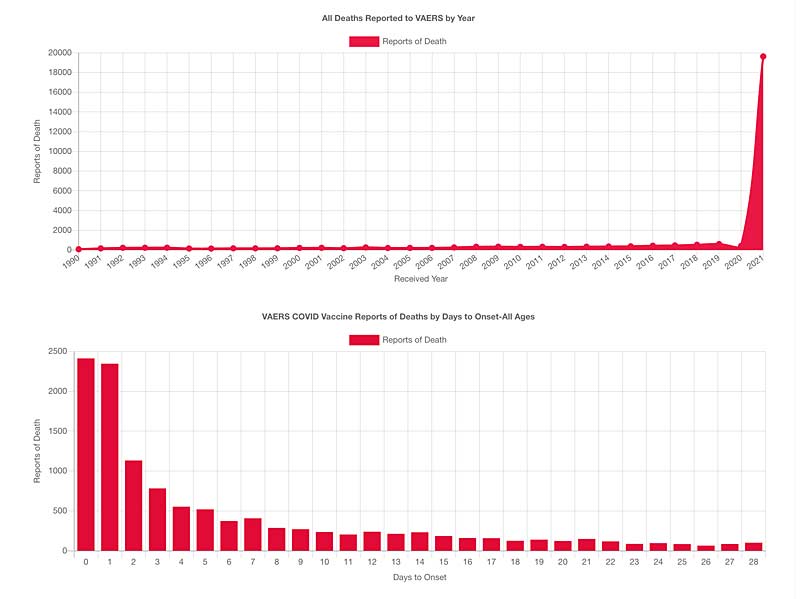 While we’re starting to hear more about the heart damage and strokes the COVID shots cause, a troubling effect that isn’t getting the attention it deserves is miscarriage. As of November 19, 2021, 3,071 miscarriages had been reported to the U.S. Vaccine Adverse Events Reporting System (VAERS). There were also:6

All of these effects point to the shots having an adverse impact on human reproductive health. A recent paper7 in Science, Public Health Policy, and the Law addresses reproductive concerns, noting that while “the use of mRNA vaccines in pregnancy is now generally considered safe … the influential CDC-sponsored article by Shimabukuro et. al.8 (2021) used to support this idea, on closer inspection, provides little assurance …”

In particular, getting the COVID shot during the first 20 weeks of pregnancy is extremely risky — the risk of miscarriage is anywhere between 82% and 91% — but Shimabukuro et. al. hid this stunning finding in their paper.9 Here’s how they did it.

According to Shimabukuro et. al.,10 the miscarriage rate within the first 20 weeks of pregnancy was 12.6% (104 miscarriages out of 827 pregnancies), which is only slightly above the normal average of 10%. However, there’s a distinct problem with this calculation. As explained in the Science, Public Health Policy, and the Law paper:11

“… closer inspection of the 827 women in the denominator of this calculation reveals that between 700 to 713 women were exposed to the vaccine after the timeframe for recording the outcome had elapsed (up to 20 weeks of pregnancy).”

If you only include women who were at risk for side effects during the first 20 weeks, because they actually got the shot during those first 20 weeks, then there are only 114 or, at most, 127 of them left in that group. And that changes the calculation considerably! What we actually have are 104 miscarriages out of 127, which is 82%, or possibly as high as 104 out of 114, which is 91%.

Of those 104 miscarriages, 96 of them occurred before 13 weeks of gestation, which strongly suggests that getting a COVID shot during the first trimester is an absolute recipe for disaster.

The Science, Public Health Policy, and the Law paper points out several other problems with Shimabukuro’s analysis that compound the confusion, including the fact that they used overlapping periods of exposure and outcome:

This strikes me as an intentional misdirection strategy to confuse and obfuscate. They could easily have used the same periods for exposure and outcome, either the three trimesters or weeks 1 through 20 and weeks 21 through 40.

Another Problem With Shimabukuro’s Paper

Another minor detail found in Shimabukuro’s paper hints at an effort to downplay and hide the miscarriage risk. The authors claim the normal rate of miscarriage in the published literature is between 10% and 26%.

However, the 26% rate includes clinically-unrecognized pregnancies, and since the cohort under investigation included only clinically-RECOGNIZED pregnancies — meaning women who knew they were pregnant — that 26% statistic does not apply. Basically, it’s included to confuse you into believing that the miscarriage incidence is far higher than it actually is.

Looking at statistical data, the risk of miscarriage drops from an overall, average risk rate of 21.3% for the duration of the pregnancy as a whole, to just 5% between Weeks 6 and 7, all the way down to 1% between Weeks 14 and 20.13

So, when you consider that the normal risk for miscarriage is just 5% by the time you enter Week 6 (and many women don’t even realize they’re pregnant before that time), an 82% to 91% risk of miscarriage is no negligible increase. This should also make everyone realize that recommending this injection to pregnant women is a reprehensible crime against humanity.

Giving pregnant women experimental gene-based therapies is reprehensibly irresponsible, and to suggest that safety data are “piling up” is nothing but pure propaganda. Everything is still in the experimental stage and all data are preliminary. It’ll take years to get a clearer picture of how these injections are affecting young women and their babies.

Breastfeeding women also need to be aware that the mRNA in the COVID shot, as well as spike protein, can transfer through breast milk. This is another way by which infants can be put at risk for acute and/or longer term health problems. So, if you got a COVID shot after giving birth, please understand that you are not transferring protective antibodies.

You’re transferring the vaccine itself, and the toxic spike protein your body produces, to your baby. In March 2020, a 5-month-old infant died from thrombotic thrombocytopenia purpura within days of his mother receiving her second dose of the Pfizer vaccine.14,15 In addition to that lethal case, there are at least 72 other cases where toddlers have had an adverse reaction to breast milk from a vaccinated mother.16

There Are Plenty of Cause for Concern

In closing, I urge you to read through these selected highlights from the Science, Public Health Policy, and the Law paper:17

“The sweeping conclusions of safety that Shimabukuro et al. (2021) make are not convincing … [M]echanisms which may be disrupted by the injection include syncytin-1 (syn1), a fusogenic protein of retroviral origin, essential for cell fusion and placental development.

Studies are required to determine if mRNA encoded spike (S) protein HR1 (or HR1a28) or HR2 has the ability to inadvertently inhibit syn1, preventing the cell fusion required for placental attachment, resulting in pregnancy loss.

The rodent studies carried out by Pfizer and Moderna to determine if there could be an impact on fertility and development may need to be repeated in Old World primates, such as macaques, as they have similar syn1 and syn2 proteins to humans, whereas rats do not.

Synctyin-1 is also required for gamete fusion (syn1 and ACET2 receptors present in sperm and oocytes) and, additionally, found in the testes34 and ovaries. In the Comirnaty (Pfizer/BioNTech mRNA vaccine) Package Insert submitted to the Food and Drug Administration (FDA), the manufacturers state that potential impairment of male fertility has not been evaluated …

We question the conclusions of the Shimabukuro et al. study to support the use of the mRNA vaccine in early pregnancy … The assumption that exposure in the third trimester cohort is representative of the effect of exposure throughout pregnancy is questionable and ignores past experience with drugs such as thalidomide.

Evidence of safety of the product when used in the first and second trimesters cannot be established until these cohorts have been followed to at least the perinatal period or long-term safety determined for any of the babies born to mothers inoculated during pregnancy.

Additionally, the product’s manufacturer, Pfizer, contradicts these assurances, stating: ‘available data on Comirnaty administered to pregnant women are insufficient to inform vaccine- associated risks in pregnancy,’ and ‘it is not known whether Comirnaty is excreted in human milk’ as ‘data are not available to assess the effects of Comirnaty on the breastfed infant’…

Due to the nature of the mRNA vaccine roll-out, healthcare providers need to report any issues in pregnancy to further determine the safety of this product …

Considering the evidence presented here, we suggest the immediate withdrawal of mRNA vaccine use in pregnancy (Category X) and those breastfeeding, alongside the withdrawal of mRNA vaccines to children or those of child-bearing age in the general population, until more convincing data relating to the safety and long-term impacts on fertility, pregnancy and reproduction are established in these groups.”